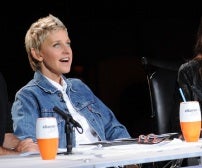 Ellen DeGeneres made exactly eight jokes on Tuesday night’s "American Idol." That brings her grand total of useful contributions in her first season as a judge to nine (the first being that color of blue we’ve never seen before.)

After rubbing all meaning from the words "good," "great," "amazing," "adorable" and "I love you" with sheer overuse over the first month of the show, DeGeneres found her big-stage voice on Top-12 night.

Apparently, she got the memo that comics are supposed to be funny. While none of it was much beyond lowercase-lol funny, it was at least … something.

So here they are — Ellen’s first value-adds beyond the elevated temperature of her seat cushion:

1. "You made the word ‘fire’ two syllables … so that was grr-eat.” — to Didi Benami, on her intense-a-thon performance of "Playing With Fire."

2. "Well, for most women, their hearts are going to start racing just looking at you. But then for people like me … you know … blondes … ." — To country/soul heartthrob Casey James.

3. "You like to sit on the edge of things. Don’t go to the Grand Canyon.” To Lacey Brown, who sat on the stage, as is her habit.

4. "First of all, I almost wore that.” — To Katie Stevens, who wore a feminine baby-doll dress in a romantic floral print.

5. "You rise above a sea of people. Like Snooki’s poof; you just stand out." — To Siobahn Magnus, who is plainly awesome.

6. "It almost didn’t come together. Like a hospital gown." — To Lee Dewyze, whose last name looks made up.

8. "Stop thinking. No one should think – remember that, kids." — To Crystal Bowersox, who said she was overthinking, when really her only mistake was forgetting to leave her guitar case open at her feet.

At this rate, Fox/Fremantle may want to consider making this a paying gig for Ellen.