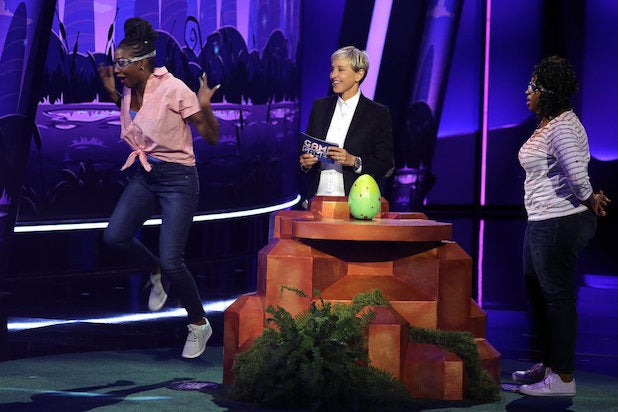 “Ellen’s Game of Games” returned with a Nielsen-ratings victory Tuesday night, as the highest-rated entertainment program of the evening in the key adults 18-49 demo.

And that win came during a scrambled up primetime, thanks to President Trump’s televised Oval Office address — and the follow-up response from Democratic leaders Rep. Nancy Pelosi and Sen. Chuck Schumer — which was aired across all broadcast networks in the 9 o’clock hour, according to preliminary numbers.

(You can read about how POTUS’ portion of that “border wall” speech did in comparison to the Democrats’ in overnight ratings here.)

The second season of NBC’s Ellen DeGeneres-hosted game show premiered at 8 p.m. to a 1.5 rating and 6.5 million viewers. That’s down from its 2.0 average for Season 1, but good enough to carry NBC to a key demo win on a night when it — and all of its competitors — aired the president’s speech/Dems’ response from 9-9:25 p.m. ET.

Also assisting in that demo win for the network was NBC’s airing of the Trump address, which was Tuesday primetime’s highest-rated program overall in the 18-49 range, when sandwiched between the new “Game of Games” and a rerun of the competitive series.

However, CBS took first place in primetime’s total-viewers category, thanks to a strong “NCIS” crowd and the most overall eyeballs for the Oval Office address.

Also Read: Time for 'Schooled': How 8 Other Broadcast Spinoffs Are Doing in TV Ratings

The below data is subject to significant adjustment due to the live news coverage. More accurate final numbers for the speech and response will be available later Wednesday.

NBC was first in ratings with a 1.4 rating/6 share in the advertiser-coveted 18-49 demographic and second in total viewers with an average of 6 million, according to preliminary numbers. Following the “Ellen’s Game of Games” premiere (which got the above numbers and a 6 share), NBC’s broadcast of the presidential address at 9 p.m. scored a 1.7/7 and 7 million viewers. That number represents the speeches and the first few minutes of a truncated “Ellen’s Game of Games” rerun, which aired immediately after the address. At 10, “New Amsterdam” put up a 1.0/5 and 5.3 million viewers.

Univision and Telemundo died for fifth in ratings, each with 0.4/2.

Univision was fifth in viewers with 1.4 million.

Telemundo was sixth in viewers with 1.1 million.