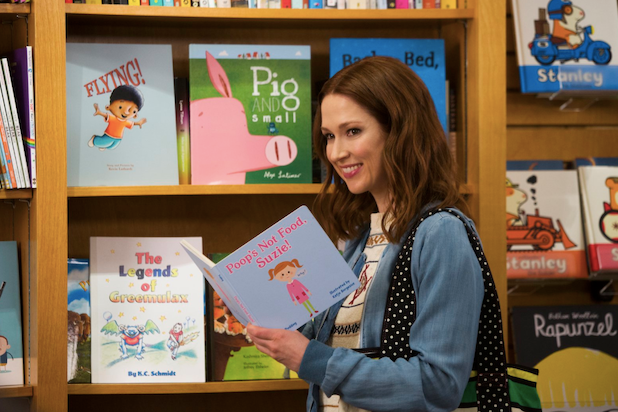 (Warning: This post contains spoilers for “Unbreakable Kimmy Schmidt” through the series finale)

The series finale of “Unbreakable Kimmy Schmidt” launched on Netflix Friday — along with the other five remaining episodes of the comedy created by Tina Fey — giving each of the four lead characters their version of a happy ending.

In the year 2023, Titus (Tituss Burgess) is a famous actor being interview on the red carpet for “Sliding Doors 2: Toyko Doors,” with Mikey as his husband and two “beautiful ethnic babies.” Lillian (Carol Kane) is the new voice of the MTA and keeping her East Dogmouth street cred. Jacqueline (Jane Krakowski) is a top agent working alongside and dating fellow top agent Eli Ruben (Zachary Quinto). And Kimmy (Ellie Kemper) ended up doing what she always wanted to do: make the world a better place.

In the closing moments of the series finale, we see Kimmy at the grand opening of Gremulax World at Universal Studios, a theme park based on her successful children’s book, “The Legends of Gremulax.” A little boy comes up to Kimmy and tells her the books she’s written “make me feel safe” and she smiles from ear to ear.

“I think what was cool for me is she struggled with writing that book she wanted people to respond to, it she wanted to make the next generation of kids into better adults,” Kemper said. “And the fact that she achieved that is so profound, I think. And then the creation of that amusement park, Grimulax World- I’m imagining as we pane out from it, it’s almost as if nothing better could have happened for her because all she wants to do on a daily basis is make the world better and then she did. So I was really happy for her when she succeeded.”

And while she was a big fan of how the series came to a close, she’s still on board for that movie everyone keeps asking about. However, she has no idea what it would be about or whether or not it will actually happen.

“I know that there has been talk of a movie, but that’s about all I know,” Kemper told us. “That’s where my information ends, that there is an idea of doing a movie. I don’t know what story it would tell or what the plot points would be — or if there is even going to be one. But I hope that there is because it would be so much fun to revisit these characters and also the people who play them and the crew that creates their world that would just be fun from a personal point of view.”

But, like we said, she really liked that series finale.

“On the other hand, I think that is a really beautiful ending and give all the credit to the writers because I think they wrapped up each characters’ story really beautifully and also in a really satisfying way,” Kemper said. “I think there is definite closure for everyone in that world. And of course I’m partial to Kimmy because I play her, but I just thought that was such a sweet ending for her to make a concretely positive difference in the world. It just felt like such a fitting sendoff for her.”

As for what she personally thinks a “Kimmy” movie — if it happens — should be about, Kemper has a few ideas that involve her love life — and possibly parenthood.

“I thought it was interesting that they didn’t really end on her in any kind of satisfying romantic relationship,” she said. “I thought it was nice in a way that they focused on what she had done with her work and her job and the difference that that made. But I definitely think she wants to share her life with someone and she loves children. She wrote this book for children and she was sort of stunted at a certain age for a long time.”

“She would be such a beautiful mother,” she added. “And I don’t mean beautiful perfect, but she would do such a beautiful job raising children. So maybe if and when there is a movie that would be part of her life. But I think she has retained this sense of determination and tenacity through the toughest of circumstances. Having said that, I think she definitely deserves companionship.”