Since he published his first novel, “The Bounty Hunters,” back in 1953, novelist and screenwriter Elmore Leonard has established himself as a crime writer par excellence – and the go-to guy when Hollywood needs gritty realism and, well, Leonardesque dialogue. To paraphrase his own “Ten Rules of Writing” essay, “If it sounds like writing, I rewrite it.”
The result? A long list of films with memorable characters and snappy dialogue, ranging from 1967’s “Hombre,” starring Paul Newman, to “Out of Sight,” “Get Shorty,” “Jackie Brown,” “Glitz” and the upcoming “Freaky Deaky”–  all based on his work. His latest was for the small screen, “Justified,” which premieres on FX Tuesday.
You’ve had a long history with Hollywood.

(Laughs) Since the ‘50s, but the last screenplay that actually got made was “52 Pick-Up” with Roy Scheider, back in ’86.
I had nothing to do with all the others, like “Get Shorty” and “Out of Sight.” I just sold the rights. But I knew the screenwriter for those, Scott Frank, and we’d discuss the scripts – not so much for “Get Shorty,” but for “Out of Sight,” and he’d have a lot of questions about the characters. 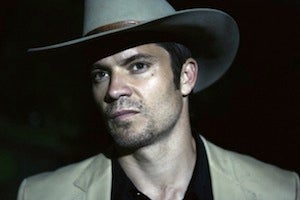 Why did you stop?
You have to work with too many people, and there are so many opinions, so it’s just a big waste of time for me. If you get with the right people, the right director, then that’s fine. But usually at first you’re just working with someone on the producer’s staff.
Of all the Hollywood adaptations of your books, which ones got it right?
I think “Get Shorty,” “Out of Sight” and “Jackie Brown” were the closest in spirit to the books. Quentin Tarantino stayed very close to my story with “Jackie Brown.” The others added little things here and there — but you have to for a movie.
What about “3:10 to Yuma,” which was based on one of your short stories?
The first version was back in ’56, and it stayed closer to my story. The second time around they made it a much bigger picture, with Russell Crowe and Christian Bale — with a lot more action. I really liked it – right up until the end. The ending didn’t make a lot of sense to me.
The’re going to make a film of “Freaky Deaky”…
Yeah, Walter Matthau’s son, Charlie, has the rights, and he’s going to produce and direct it. He’s had the option for a few years, and I think he’s finally got the script the way he wants it, so we’ll see.
Tell us about “Justified.” You’ve done quite a few TV projects over the years, haven’t you?
Yeah, I’d sold a couple of projects, such as “Karen Sisco” which only ran six episodes which was too bad, as I thought it was a pretty good show. I was surprised when they came to me about “Justified,” about this Deputy U.S. Marshal played by Timothy Olyphant, who was in “Deadwood,” another great show. It’s based on this short story I did, “Fire in the Hole.”
I got involved as an executive producer. I met the writing team – there were about eight of them – and I sat with them at this long table and talked about story. They really got my style and voice down – a lot of it sounds like I wrote it, but I can’t imagine being part of a writing team like that. I’ve got my own ideas and I’ve got to do my own thing.
And I’ve got another new project over at AMC that’s based on “Mr. Paradise,” but they’re altering my book a bit I believe. I’m not involved with that one yet.
Is it true that you still never write on a computer?
Yeah, I still write everything in longhand first, on these special yellow pads that I have made up. I always used them when I started out, working at an ad agency, doing Chevy ads, and I still like to work that way. Then I type it all out, but I never use a computer.
How’s Hollywood changed for you over the years?
Well, the money’s a lot better now. When I wrote “3:10 to Yuma,” I sold the original story for $90, and then got $4,000 for the movie rights.
Do you see all the new movies?
Some of them. I loved “The Hurt Locker.” I thought that was great and I voted for that, as part of the Academy. It’s one of the few I voted for. I also loved “An Education.” I haven’t seen “Avatar” yet. They sent me a copy but it wouldn’t play on my set.
What’s next?
I have a new book coming out in October, called “Djibouti.” It’s all about this documentary filmmaker who goes there to shoot these Somali pirates, and then she meets one who’s got all this cash and he’s driving around in a Mercedes, as they’re doing pretty well. And then Al Qaeda appears, and there’s a lot of action.
Sounds like it’d make a good movie.
Maybe, but I won’t be doing movies anymore. Dealing with books is just so much easier. I’d rather just write.
x