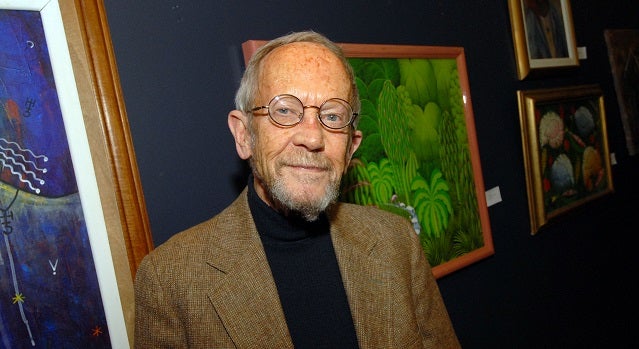 Family, friends and fans celebrated the memory of Elmore Leonard with tears, laughter and military honors at a memorial Saturday in Birmingham, Mich.

The prolific author, whose works including “Get Shorty,” “Jackie Brown” and “Freaky Deaky,” were turned into movies, died at his nearby home Tuesday morning three weeks after suffering a stroke. He was 87.

His longtime friend, sportswriter Mike Lupica, and Timothy Olyphant, star of the FX TV series “Justified” – which is based on Leonard’s works — were among the roughly 325 people that gathered, according to the Detroit Free Press.

Rev. Joe Grimaldi eulogized the man known to many as his closest associates as "Dutch."

"Elmore truly was gifted with creativity, skill and talent," Grimaldi told the audience during his homily. "The twinkle in his eye showed he also enjoyed having fun."

He was remembered for his work and his time in Navy during World War II, but he was also remembered as a father.

Bill Leonard, one of Leonard’s three sons, remembered his father’s well-known “10 Rules of Writing,” which ends most famously with “Try to leave out the part that readers tend to skip.”

He said his dad should have written “10 Rules of Parenting,” which would have included: Always buy your children gum when going to the grocery, let them work the car’s stick shift, never let them leave food on a plate and never read them bedtime stories. Make up your own.

Leonard said he’d received lots of condolences since his father’s death, none so poignant as one he received from a Facebook friend:

“What an understatement that is,” said his son.