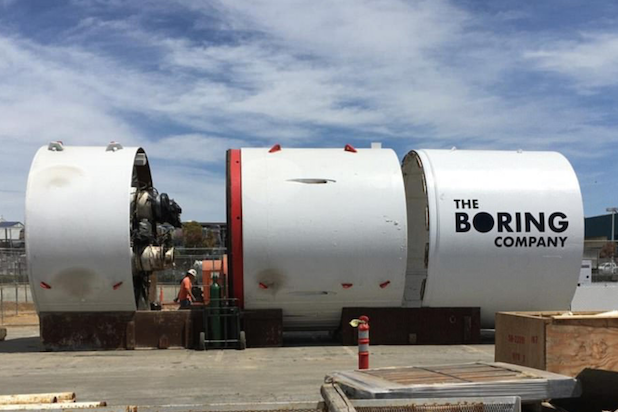 Who knew Elon Musk was a fan of poetry?

The Tesla and SpaceX boss tweeted late on Wednesday his other ambitious venture, The Boring Company, is “almost ready” to unleash its second tunnel digger, artistically named “Line-Storm” after a Robert Frost poem.

“The line-storm clouds fly tattered and swift, the road is forlorn all day, where a myriad snowy quartz stones lift, and the hoof-prints vanish away,” goes the opening verse.

Second boring machine almost ready. Will be called Line-Storm, after the poem by Frost. "And be my love in the rain." pic.twitter.com/xlWPYdPu3P

The Boring Company is Musk’s attempt to solve one of humanity’s most vexing questions: Los Angeles traffic. With a series of underground tunnels, passengers will dart across town by hooking their cars up to underground sleds. Moving at speeds up to 125 miles per hour, Musk previewed the rapid sleds back in May on his Instagram. Looks a lot better than sitting in traffic on the 405 freeway.

[Warning, this may cause motion sickness or seizures] This is a test run of our electric sled that would transport cars at 125 mph (200 km/h) through the tunnels, automatically switching from one tunnel to the next. Would mean Westwood to LAX in 5 mins.

The Boring Company received the green light to dig a two-mile tunnel from the City of Hawthorne — its hometown — in August. Until then, it’d only been able to drill directly below SpaceX’s headquarters. Keeping with the company’s literary tradition, its first tunnel-digger was called “Godot” — not a typo of the Wonder Woman actress’ name, but a line from the Samuel Beckett play “Waiting for Godot.”

Musk is looking to take the traffic fix beyond L.A., however. The serial entrepreneur tweeted in July he’d received “verbal government approval” to start building an East Coast version of his plan — zipping commuters from New York City to Washington, D.C. in just 29 minutes.

TheWrap has already made it clear to Musk’s PR team it’s ready and willing to try out the underground sleds when The Boring Company is set to demo.