Tesla shares sank on Friday, after the company’s chief accountant abruptly left the company — and its chief executive, Elon Musk, took a puff of marijuana on a Joe Rogan podcast.

“You probably can’t because of stockholders, right?” Rogan presciently asked Musk while handing him a tobacco and marijuana-filled cigar on Thursday.

The move sent many on Twitter buzzing late on Thursday and early Friday. But in a two-and-a-half-hour podcast touching on an array of topics, from artificial intelligence to the future of humanity, Wall Street appears to have weeded out Musk’s smoking as a sign the entrepreneur is cracking.

Tesla shares dipped 5 percent in early trading, hitting about $266 per share. The drop sustained a monthlong decline for the electric car company, which had spiked to $380 a share after Musk tweeted he had “funding secured” to take Tesla private — a decision he later walked back. 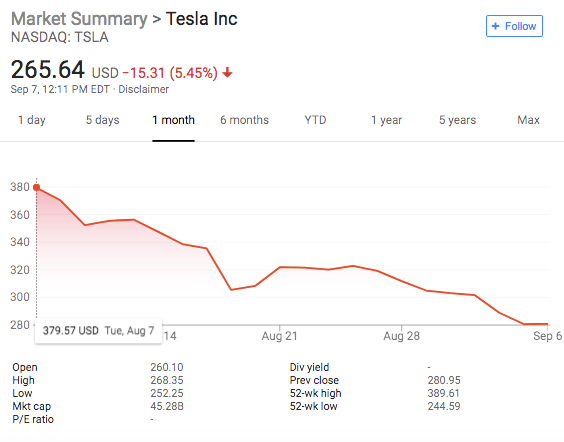 It’s been a painful month for Tesla shareholders, following Musk’s “funding secured” tweet to take the company private (via Google)

Compounding matters for Tesla shareholders, chief accounting officer Dave Morton resigned earlier this week after a month on the job, according to a Tesla security filing on Friday. Morton’s exit comes soon after the Security and Exchange Commission opened an investigation into Musk’s halted plans to take Tesla private.

Also Read: Elon Musk Needled for Tearful NY Times Interview About Having to Work Through His Birthday

“Since I joined Tesla on August 6th, the level of public attention placed on the company, as well as the pace within the company, have exceeded my expectations. As a result, this caused me to reconsider my future,” Morton said in a company filing.

“I want to be clear that I believe strongly in Tesla, its mission, and its future prospects, and I have no disagreements with Tesla’s leadership or its financial reporting,” Morton added.

Morton’s exit and Musk’s podcast appearance pushed the company’s 2025 bonds to an all-time low, to roughly 82 cents on the dollar.