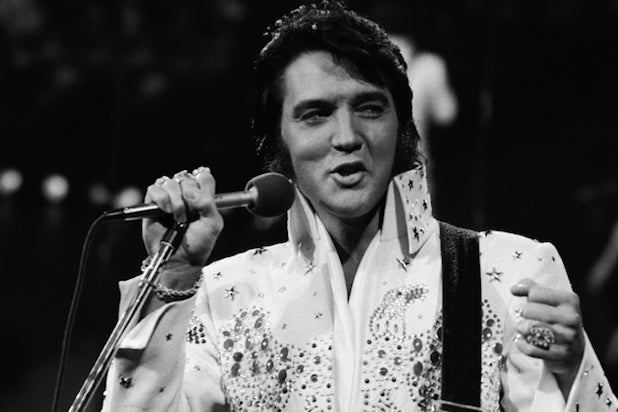 On August 16, there will be countless remembrances, among fans and the news media, of Elvis Presley’s shocking (opioid-induced) death 40 years ago. Graceland, of course, has a week of activities planned, but we’ll be seeing the vigils and events on more traditional news outlets as well. (More than we’ll see about the anniversaries of Hiroshima and Nagasaki).

It may not strike you as unusual that even the headiest of outlets understand the impact of culture on society, and the impact of particular icons on culture. But the truth is, taking celebrities seriously enough to feature their lives — and deaths — on (non-fake) news programs, was not always a given. Many feel everything changed on August 16, 1977, when Elvis died. That night, one network missed the story’s relevance. And there were lasting repercussions.

The most trusted man in America, CBS anchor Walter Cronkite, happened to be off, and Roger Mudd was sitting in. The newscast’s “fish bowl” — the key group of senior producers — had decided to lead with a story about the proposed Panama Canal treaty. While the program was being prepped, the wires exploded with news that Elvis Presley had died. ABC and NBC led with the death and ran special broadcasts after their late local news. CBS producers decided to include it, but only later in the broadcast.

Also Read: Elvis Presley: 11 Shots of the King in His Prime (Photos)

“All I remember is being on the phone and telling my bosses they would forever regret this lapse in judgment,” says Rick Kaplan, who was a CBS News producer, but on vacation, at the time. “CBS wasn’t used to having the obviously wrong lead and in those days, when its audience was north of 25 million.”

It did not take long for the executives to realize they’d underestimated the appeal of someone they may have considered the singer who made Ed Sullivan blush, and sent millions of women into orgasmic hysterics. The story sent shock waves around the world with more than 80,000 shattered fans showing up at Graceland.

And talk about being all shook up! The president of CBS News, Richard Salant, was immediately put on the hot seat when he reportedly declared that, “Our job is not to respond to public taste.” Nevertheless, two months later, when Bing Crosby dropped dead on a golf course, it led the Cronkite broadcast. Soon, Salant was gone, replaced by Bill Leonard and eventually, in 1981, the network tapped Van Gordon Sauter, the president of CBS Sports, to run the news division. While we may not definitively be able to connect the Elvis-Sauter dots, one can argue the network was ready for a savvier arbiter of all things cultural.

It is fair to say everyone in the heady world of network newscasts realized, post-Elvis, that entertainment news may very well be worthy of the front page, so to speak. “The episode, rightly or wrongly, alerted people to the possibility that a vaunted news division was out of step,” says Sauter today. Under his leadership — and that of legendary newsman Howard Stringer — CBS gradually changed the definition of news, enhancing promotion and including entertainment stories that transcended the Hollywood gossip columns, trade papers and even their own valued entertainment news show, “Entertainment Tonight.”

The impact of the Presley story spread beyond one network. Even Frank Reynolds, the seemingly stodgy, old-fashioned ABC News anchor, got it. When John Belushi overdosed in 1982, Reynolds immediately told his producers, “I guess we better lead with it.”

That was then. Now, the deaths of figures like Michael Jackson, Carrie Fisher and Whitney Houston figure prominently on the nightly news as well as on the front page of major American newspapers and countless media sites that understand the wide interest of a celebrity story. The fact that a former reality-show host leads (non-fake) newscasts every night, is proof alone that we have arrived at the ultimate crossover.