Sixty-four years ago, on Jan. 8, 1946, Gladys Presley gave her beloved only son a guitar for his 11th birthday. The high-spirited boy had wanted a bicycle, but his ever-protective mother feared he might hurt himself.

A decade later, Elvis rehearsed “Heartbreak Hotel” on his birthday and, two days later, recorded it at RCA Studios in Nashville. The tune became the biggest hit of 1956, turning the former Crown Electric truck driver into the King of Rock ‘n’ Roll himself.

Thomas Durden, a Nashville steel-guitarist, had composed the historic song after reading a Miami Herald story about a man who killed himself over a lost love. His suicide note simply read: “I walk lonely street.”

“Well, since my baby left me, I found a new place to dwell,” sang Elvis. “It’s down at the end of lonely street at Heartbreak Hotel.”

After the release of his birthday song, the young King – every man’s envy, every girl’s dream – seemed the least 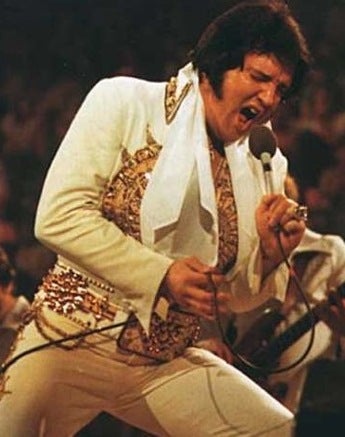 lonely mortal in the world.

Then, in 1958, he lost his mother. “Please don’t take my baby away!” he had sobbed, throwing himself over her coffin and refusing to let go. “She’s not dead. She’s just sleeping.” Then as she was lowered to her resting place, “Goodbye, darling. I love you so much. I lived my whole life just for you.”

Later, Elvis said, “I lost the only person I ever loved.”

At last his grief subsided when he met Priscilla Beaulieu. His family and friends marveled at how the beautiful 14-year-old ingénue resembled Gladys in her own youth.

Priscilla became what she called Elvis’ “Pygmalion.” “He relished the role of re-creating me,” she later wrote. “Like a sculptor, he could shape my image and design my demeanor in ways that would bring him delight.”

After an eight-year courtship, the King at last tied the knot with his completed creation. “I’ll give you Elvis’ relationship with her in a nutshell,” later wrote his Man Friday, Lamar Fike. “You create a statue. And then you get tired of looking at it.”

But that wasn’t all. Elvis had confided to other friends that he could not consummate with a mother. Within a year of the marriage, Priscilla had given birth to their daughter, Lisa Marie. By this time Elvis was calling her “Satin,” his nickname for his satin-skinned mother.

On his 37th birthday, the King announced that Priscilla was leaving Graceland and taking Lisa Marie with her. On his 39th birthday, he signed the final divorce papers.

Perhaps then he recalled “I Was the One,” the flipside of “Heartbreak Hotel.” Though he taught her how to kiss and how to cry, he sang, “I’ll never know who taught her to lie. Now that it’s over and done, who learned the lesson when she broke my heart? I was the one.”

Elvis had been repeatedly unfaithful to Priscilla, driving her at last into the arms of her karate instructor.

The King burned with jealousy. Though almost any other woman could still be his, he now walked Lonely Street. He moved his fans to tears with his other laments: "Just Call Me Mr. Lonesome." "Are You Lonesome Tonight?" "Lonely Man." "I’m So Lonesome I Could Cry."

In signing the divorce on his birthday, surely he hoped for a new beginning. But on his birthday the next year, Walter Cronkite, flashing a recent photo, announced on the evening news: “Elvis – fat and 40!”

The King collapsed and had to be carried to his bedroom. Weeks later he was checked into Baptist Memorial as “Aaron Silvie.” Here he underwent a second narcotics detox.

When once asked his secret for looking so young, Elvis had replied, “Vitamin E!”

In the last 20 months of his life, he was written 12,000 prescriptions for pills and injectibles – mostly narcotics. Eleven different kinds were found in his system by the coroner. The King died of a massive overdose.

Shortly before that tragedy, he’d phoned his long-lost friend and bodyguard, Red West. By this time he had lost not only his mother and his wife, but many of his old friends. “I feel terribly alone, like that Number 8,” he told Red.

A longtime student of Cheiro’s numerology, Elvis, due to his birthdate, identified himself as a Number 8 person. “These people… feel intensely lonely at heart,” wrote Cheiro. “… They are either great successes or great failures, and often face the very greatest sorrows and losses.”

Weeks after Elvis’ last birthday, he gave a $70,000 engagement ring to the stunning young Ginger Alden. “She didn’t give a rat’s ass about him,” said Lamar Fike. Soon Elvis seemed to realize this, even suspecting that she was having an affair with his stepbrother, David.

The King’s fiancée was the one who found his body on the bathroom floor. Before she alerted his father and the Graceland staff, she placed a call to the Enquirer.

The King & the Cover-Ups