Emani 22, an R&B singer whose real name was Emani Johnson, has died. She was 22.

Record producer J Maine confirmed the singer’s death to People. “Emani 22 was a wonderful individual that literally brightened up any room she was in,” he said.

The cause of Emani 22’s death has not been immediately revealed. 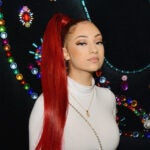 “I worked on music with her, and helped her put together her last project which was ‘The Color Red.’ The way we worked together was effortless, we just understood each other,” J Maine said. “It hurts so bad to know that the last time I saw her was the last time I’d ever see her again. “I considered her to be like a little sister to me. She will be missed and never forgotten, and I’ll always think about the great times we had hanging out.”

Rapper Bhad Bhabie responded to the news of Emani 22’s death with a tribute to the singer on Instagram.

“I used to spend almost everyday with you. You taught me so many things. You are my inspiration for many things (hair,nails, style, etc) my big sister ?,” she wrote in one post’s caption. “I’m gonna miss you so much.”

Bhabie also posted a photo of Emani 22 with a dog on her chest captioned “Chuppas favorite auntie ??.”

Emani 22 also collaborated with Trippie Redd on twice, for “Emani’s Interlude” and “Fire Starter.” She released her “The Color Red” EP in 2020.