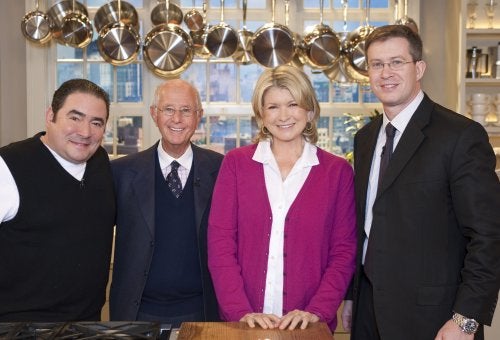 The hourlong weekly primetime series, which will tape in front of a live studio audience, premieres Sunday, March 28, at 8 p.m.

On the show, Lagasse will welcome celebrity guests, musicians and entertainers to break news and break bread with him. It also will have field pieces shot in and around New York City, where the show will be taped. The show will have a house band, playing live music and interacting with the chef as well as his guests and audience.

The show will include innovative marketing opportunities meant to appeal to advertisers from a broad range of categories.

"We are excited to bring Emeril’s ‘Positively Entertaining’ persona and larger-than-life superstar-chef status to Ion Television. His brand will be a dynamic addition to our general entertainment network and a treat for our audience," Brandon Burgess, Ion Media Networks chairman-CEO, said in a statement.

"Emeril is a terrific talent whose passion for food coupled with his natural showmanship will attract a broad range of viewers," said Charles A. Koppelman, executive chairman of Martha Stewart Living Omnimedia, which acquired the assets related to Mr. Lagasse’s media and merchandising business in 2008. "This new show is an important step in further extending the Emeril Lagasse brand."

"I’m excited to be live on ION Television nationwide, bringing the high energy, interaction and everyday celebrations to audiences across the country. I look forward to sharing my passion for interesting people, fascinating places, good music and, of course, great food," Lagasse said in a statement.

Newcomer Ion Television concluded 2009 with record year-over-year growth in households, adults 25-54 and adults 18-49, posting 49%, 65% and 74% growth in those demographics, respectively. Ion is one of the fastest-growing U.S. television networks, taking the Q4 2009 top spot among fully distributed broadcast and cable networks.