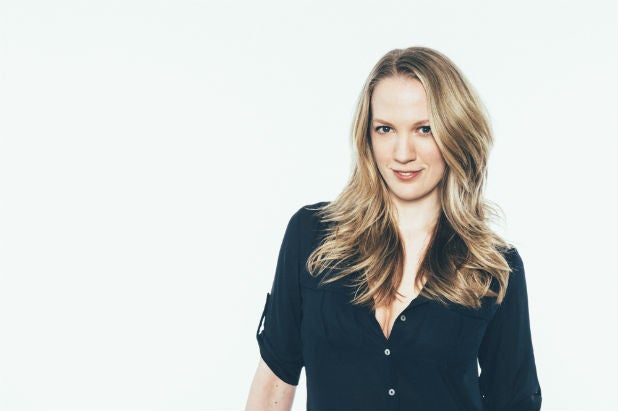 Considered a female version of “The Goonies, “Lumberjanes” tells the story of five young girls at summer camp who must unite to fight a supernatural threat to the camp and the surrounding forest.

Ross Richie and Stephen Christy are producing for BOOM!, with Adam Yoelin co-producing.

Will Widger wrote the first draft of the script. The project is a priority at the studio, and Carmichael is the second female director hired onto a Fox movie in as many months, with “Kung Fu Panda 3”‘s Jennifer Yuh Nelson recently being hired to direct “Darkest Minds” for the studio.

Earlier this year, the studio had no female directors slated through 2018.

“Lumberjanes” has sold more than 500,000 copies worldwide since its debut, and has become one of the biggest breakout comic book franchises of recent memory, with a devoted following of readers.

Carmichael is on a hot streak since directing award-winning shorts such as 2011’s “The Hunter and the Swan Discuss Their Meeting” and 2013’s “RPG OKC.”

Back in the spring, she set up “Powerhouse” at Steven Spielberg‘s Amblin Entertainment with “Jurassic World” director Colin Trevorrow and Simon Kinberg attached to produce.

She was also the subject of rampant speculation that she might direct Brie Larson in Marvel’s upcoming “Captain Marvel.”

Carmichael is repped by Verve.

20th Century Fox, Paramount Have No Female Directors Through 2018

Female directors in Hollywood haveÂ spokenÂ out about gender discrimination again and again and again. So it is surprising that not a single female director appears on the upcoming release slate for 20th Century Fox or Paramount, two of Hollywood's major studios. A tally by TheWrap found 22 consecutive films from Fox -- not counting Fox Searchlight, the studio's art-house division -- and 25 consecutive releases from Paramount had only male directors attached. So far, that covers all movies scheduled to hit theaters this year, next year and 2018 too. Representatives for Fox declined to comment; Paramount did not respond to repeated requests from TheWrap. Neither studio disputed the statistics. "It is always shocking, though unfortunately not surprising, to see that studios continue to not give women opportunities to direct," Melissa Silverstein, founder and publisher of Women and Hollywood, told TheWrap. "This is a complex issue. The film business is layered with sexism so that when you peel away one layer, you still have many layers to get through."

A plethora ofÂ disappointing dataÂ about the lack of women directors in Hollywood has received a great deal of attention in the past few years. A long-term study by Martha Lauzen found that only 9 percent of the top 100-grossing movies were directed by women last year. Meanwhile, Hollywood keeps pledging to change.Â Stacey Snider, who joined Fox in 2014 as co-chairman and CEO of the film studio with Jim Gianopulos, has addressed the obstacles facing women in Hollywood. "The issue of opportunity for women is real, and it's in front of us," she said last fall. "It's incumbent upon us as business leaders to really address it seriously." But aside from Jennifer Yuh Nelson and Alessandro Carloni's "Kung Fu Panda 3," the DreamWorks Animation hit which Fox distributed earlier this year as part of an output deal, the studio has not released a single movie with a female director since Elizabeth Allen Rosenbaum's "Ramona and Beezus" in 2010. Fox Searchlight, the art-house unit that often relies on acquisitions as opposed to projects developed in-house, has a better track record. Co-presidents Stephen Gilula and Nancy Utley have at least two movies with female directors in the pipeline, Mandie Fletcher's "Absolutely Fabulous: The Movie," due out July 22, and Jonathan Dayton and Valerie Faris' "Battle of the Sexes," which is now in production. Paramount, which traditionally has a much smaller output than the other major studios, last released a movie with a woman director in 2014: Ava Duvernay's acclaimed historical drama "Selma." With big-budget, action-packed studio tentpoles that cater to the tastes of teenage boys, women can't get access to the jobs men get. "They can't get on the studio track," Silverstein added. "The studios have been awakened and schooled on their unconscious bias. No longer is it acceptable to say that women are not competent, or there are not enough women, or that they don't know any women. This consistent and persistent view of women directors is plain and simple discrimination." Hollywood is trying to improve its statistics regarding female directors, but the truth is that global audiences won't really witness the result of this sea change for several more years. After all, the films hitting theaters this year and next were put into development pipelines many years ago, before the outcry of gender-bias reached deafening levels.

For this story, TheWrap studied 20th Century Fox next 22 movies with release dates, even vague ones like "Keeping Up With the Joneses" and "The Mountains Between Us." Fox 2000 is developing "Love Letters to the Dead" with director Catherine Hardwicke, and 20th Century Fox has said it plans to hire a female director for its comic book adaptation "Lumberjanes," but those projects remain in development and could technically disappear tomorrow. Here is the list of Fox's upcoming films: "X-Men: Apocalypse" (Bryan Singer) - 5/27/16 "Independence Day: Resurgence" (Roland Emmerich) - 6/24/16 "Mike & Dave Need Wedding Dates" (Jake Szymanski)Â - 7/8/16 "Ice Age: Collision Course" (Mike Thurmeier, Galen T. Chu)Â - 7/22/16 "Miss Peregrine's Home for Peculiar Children" (Tim Burton)Â Â - 9/30/16 "Assassin's Creed" (Justin Kurzel) - 12/21/16 "Why Him?" (John Hamburg) - 12/25/16 "Keeping Up with the Joneses" (Greg Mottola)Â - 2016 "Hidden Figures" (Theodore Melfi)Â -Â  1/13/17 "Maze Runner: The Death Cure" (Wes Ball) - 2/17/17 "Wolverine 3" (James Mangold) - 3/3/17 "A Cure for Wellness" (Gore Verbinski)Â - 3/24/17 "Mother/Daughter" (Jonathan Levine) - 5/12/17 "Kingsman: The Golden Circle" (Matthew Vaughn)Â - 6/16/17 "War for the Planet of the Apes" (Matt Reeves) - 7/14/17 "The Story of Ferdinand" (Carlos Saldanha) - 7/21/17 "Alien: Covenant" (Ridley Scott)Â - 8/4/17 "Murder on the Orient Express" (Kenneth Branagh)Â - 11/10/17 "The Croods 2" Â (Kirk De Micco, Chris Sanders) - 12/22/17 "The Greatest Showman on Earth" (Michael Gracey)Â - 12/25/17 "The Mountain Between Us" (Hany Abu-Assad)Â - 2017 "Predator" (Shane Black)Â - 3/2/18 Here is Paramount's slate: "Teenage Mutant Ninja Turtles: Out of the Shadows" (Dave Green) -Â 6/3/16 "Star Trek Beyond" (Justin Lin) -Â 7/22/16 "Florence Foster Jenkins" (Stephen Frears) -Â 8/12/16 "Ben-Hur" (Timur Bekmambetov) -Â 8/19/16 "Jack Reacher: Never Go Back" (Edward Zwick) -Â 10/21/16 "Rings" (F. Javier GutiÃ©rrez) -Â 10/28/16 "Allied" (Robert Zemeckis) -Â 11/23/16 "Office Christmas Party" (Josh Gordon, Will Speck) -Â 12/9/16 Silence" (Martin Scorsese) - 2016 Monster Trucks" (Chris Wedge) -Â 1/13/17 "xXx: The Return of Xander Cage" (D.J. Caruso) -Â 1/20/17 "Same Kind of Different as Me" (Michael Carney) -Â 2/3/17 "God Particle" (Julius Onah) -Â 2/24/17 "Ghost in the Shell" (Rupert Sanders) -Â 3/31/17 "Baywatch" (Seth Gordon) -Â 5/19/17 "World War Z 2" (Steven Knight) -Â 6/9/17 "Transformers 5" (Michael Bay) -Â 6/23/17 "Downsizing" (Alexander Payne) - 2017 "Sherlock Gnomes" (John Stevenson) -Â 1/12/18 "SpongeBob SquarePants 3" (Paul Tibbitt) -Â 2/8/19 "Amusement Park" (Dylan Brown) -Â 3/22/19 "Ripley's Believe It or Not " (Tim Burton) - TBD "The Moon and the Sun" (Sean McNamara) - TBD "Beverly Hills Cop" (Brett Ratner) - TBD "The Brazilian Job" (a.k.a. "The Italian Job II") (F. Gary Gray) - TBD TheWrap looked at the slates of all the other major movie studios too, and here is what we found: DISNEY Disney will release Mira Nair's "Queen of Katwe" later this year, and is heavily expected to work with Marvel on hiring a female director for "Captain Marvel," slated for 2019. The studio has also set Ava DuVernay to direct "A Wrinkle in Time" and Jennifer Lee to return for "Frozen 2," which she'll co-direct with Chris Buck. While Disney is releasing director Toni Myers' IMAX documentary "A Beautiful Planet," the studio had no role in the hiring. Disney also releases fewer films than most of the other major studios with the exception of Paramount, and has been busy telling female-driven stories featuring empowered female leads, such as "Inside Out," "Cinderella," "Star Wars: The Force Awakens" and the upcoming tentpoles "Moana" and "Rogue One" -- though all were directed by men. UNIVERSAL Universal has set a September release for Sharon Maguire's "Bridget Jones's Baby," and has worked closely with Working Title, the U.K. production company behind the series, on major hiring decisions. The same goes for "The Little Mermaid," a live-action adaptation from Working Title with Rebecca Thomas slated to direct Chloe Grace Moretz. Elizabeth Banks is signed to direct "Pitch Perfect 3," a follow-up to her hit sequel last year. (She's also attached to "Red Queen," a project that's merely in development.) SONY Sony currently has Patricia Riggen's "Miracles From Heaven" in theaters and its TriStar label is preparing for the release of Jodie Foster's "Money Monster" next month. This fall, Screen Gems will open Anna Foerster's "Underworld: Blood Wars," adding to Sony's tally. The studio is also actively developing three films from female directors -- a new take on "Charlie's Angels" from Elizabeth Banks, a remake of "The Craft" from Leigh Janiak and the comedy "Barb and Char" from actor-turned-director Kristen Wiig. TheWrap did not include releases from Sony Pictures Classics, since the art-house division depends mostly on acquisitions as opposed to projects that it develops in-house, with a greater say over filmmaking hires. WARNER BROS. Warner Bros. typically releases the most movies each year, and it will release three films from female directors over the next several years. There's this June's romance "Me Before You" from Thea Sharrock, "Wonder Woman" from Patty Jenkins and "Unforgettable" from the studio's longtime producer Denise Di Novi.