“Emily in Paris” Season 2 will debut before the end of 2021, Netflix revealed Thursday, along with nine stunning first-look photos at the new season of the Lily Collins-led comedy.

That’s right, you won’t be waiting too long to return to Emily Cooper’s (Collins) life in Paris and live vicariously through her adventures in the Darren Star-created version of France. Though we don’t have an exact premiere date yet, so stay tuned for that.

Here’s the official description for “Emily in Paris” Season 2: “Now more entrenched in her life in Paris, Emily’s getting better at navigating the city but still struggling with the idiosyncrasies of French life. After stumbling into a love triangle with her neighbor and her first real French friend, Emily is determined to focus on her work — which is getting more complicated by the day. In French class, she meets a fellow expat who both infuriates and intrigues her.”

Of course, if that synopsis alone isn’t enough for you — and we’re sure it isn’t — scroll to the bottom of this post to see the first images released that tease the 10 half-hour-long Season 2 episodes that will premiere later this year. 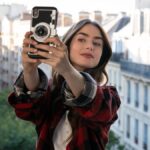 Also Read:
‘Emily in Paris': All About the Apartments, Patisseries and Courtyards in the City of Lights

“Emily in Paris,” which became Netflix’s most-viewed comedy series of 2020 and was nominated for Outstanding Comedy Series at this year’s Emmys, is produced by MTV Entertainment Studios, Darren Star Productions and Jax Media.

See the “Emily in Paris” Season 2 first-look photos below.