Eminem is causing trouble again. But this brouhaha may affect a lot more than a few freestylin’ rappers.

TheWrap has learned that a two-year-old lawsuit by the rapper is set to go to trial Tuesday and could impact a vast number of musical artists and the most popular form of music consumption — the digital download over iTunes.

A jury was seated Friday, with a star-studded witness list, starting with Jimmy Iovine, a founder of UMG and its distribution label, Interscope Records, and its subsidiary, Aftermath Entertainment, the lead defendant.

Steve Jobs, chief executive of Apple Computers, Inc., is also scheduled to testify, by video. Eminem himself is not expected to appear.

Eminem has sued Universal over how much he is entitled to when UMG sells his music to third-party distributors — including Apple’s iTunes and phone companies like Sprint and Nextel, which offer the music for ringtones.

At stake is potentially hundreds of millions of dollars for recording artists whose songs have gained unprecedented levels of distribution through digital downloads.

While digital royalties have become a growing source of conflict between artists and record companies in recent years as downloads have gained in popularity, the trial in U.S. District Court for the Central District of California represents the first legal test of the competing issues.

UMG represents a virtual who’s who of recording artists, including Akon, U2, Jay-Z and Kanye West. Aftermath was created by the rapper Dr. Dre, who brought Eminem into the fold more than 10 years ago.

“This is very significant case,” said Jay Cooper, an entertainment lawyer with vast experience in the music industry. “A lot of people are going to be watching very closely because there’s a lot of money involved.” 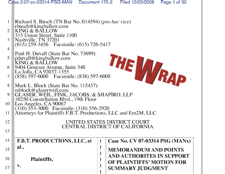 The key question for the court, Cooper said, is whether the jury will determine that the use of an artist’s music in a download deal is a licensing agreement or a distribution deal.

The difference in monetary gain for artists is potentially huge. Under traditional licensing agreements, which cover records and CDs, the artist splits royalties 50-50,with the record company. Extended to include digital downloads, that could mean as much as 35 cents for the artist for every iTunes purchase. Under a distribution arrangement, the artist might see less than 20 cents.

Cooper declined to speculate how much money may ultimately be up for grabs because contract language varies, artist to artist. Further, performers and record companies might have entirely different interpretation of the same words, which appears to be the case involving Eminem’s company.

The lead attorney for F.B.T., Richard S. Busch, declined to comment. An aide at UMG’s law firm, Munger, Tolles & Olson in Los Angeles, referred questions to UMG spokesman Peter LoFrumento, who did not respond to a telephone message seeking comment.

The sums in this specific case are not huge. F.B.T. is accusing Aftermath of withholding about $1.3 million in royalties under what it claims is a cynical interpretation of contracts with UMG, starting in 1998, that established royalties from the sale of Eminem’s music at 50 percent of net receipts. Lawyers for the rapper argue that making the work available for digital downloading is simply an extension of the original contracts.

In court papers, Aftermath disputes allegations that the company withheld royalties or that the company is misinterpreting contract language that F.T.B. says equates digital downloads to the sale of music in other forms.

“If you give the music to a third party without cost to you, like manufacturing or packaging, that’s the same as a licensing agreement,’’ said a person involved on the plaintiff’s team who asked not to be identified. “They are characterizing it as something else.’’

The plaintiffs claim that UMG has maintained “licensing agreements’’ with third-party distributors for digital downloads since 2001, including as many as 80 for so-called Mastertones, which play when an incoming call reaches a cellphone. They further say that in no contract revisions with UMG was clarifying language inserted to accommodate the changing technological landscape.

In court papers, they cite various instances when executives from UMG and digital distribution partners used the words “licensed” and “licensing” in discussing their financial relationships.

One document says Steve Jobs “discussed his company’s relationship with UMG as that of a ‘license’ in an essay titled, ‘Thoughts on Music,’ dated February 6, 2007.” It went on to say, “He explained Apple’s need to ‘license rights to distribute music from others,’ mentioning Universal and the other large record companies.’’

The defendants argue that the plaintiffs have misconstrued the contracts with UMG, that Eminem is wrong to expect that “any transaction that involves anything that might be considered a ‘license’ under federal copyright law triggers the 50% of net receipts royalty.’’

They further argue that Eminem’s production company has blurred all distinctions within the series of four contracts with UMG, assuming each of them to be a “licensed” agreement.

And they point to language in a 2004 contract amendment with F.B.T. that “expressly recognizes that downloads are sold, not licensed, for royalty purposes (indeed, that selling them is a ‘method of sale.’).”

While Cooper said he is unfamiliar with the details of the Eminem case, he cautioned, “Artists have to live with the contacts they have, even when they may not like them. These contracts have existed for a long time. It’s a question of interpretation.”