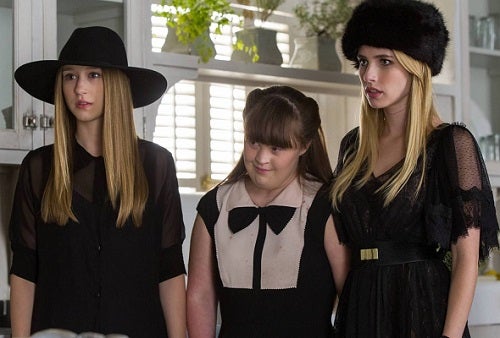 UPDATED 9:29 pm ET: Ryan Murphy pretty much confirmed Emma Roberts’ return Sunday during their live-tweet of another one of his FX series, “Pose,” writing,  “@RobertsEmma, guess what ur opening line is?”

If you had your money on the return of Emma Roberts for the next season of “American Horror Story,” collect your winnings. Judging from a video the actress posted to Instagram on Sunday, Madison Montgomery is returning from the dead, again, for the Ryan Murphy show’s big “Murder House”-“Coven” crossover.

In the extremely short video, Roberts pops into the frame dressed as Madison and basically makes an “AHS” meme reality by saying “Surprise, bitch. Bet you thought you’d seen the last of me.” The video is set to auto-repeat which just feels so appropriate considering how apparently impossible it is to keep Madison dead. Watch it below.

Also Read: American Horror Story? Ryan Murphy 'Emotional' Over Fox-Disney Deal: 'What I Do Is Not Disney'

As “Coven” fans will remember, Roberts played the self-centered, bratty teen witch/Hollywood starlet during “AHS” Season 3. Madison was one of the students at New Orleans Miss Robichaux’s Academy for Exceptional Young Ladies  and thought to be the successor to Supreme witch Fiona Goode (Jessica Lange). But Roberts’ character was offed twice during the season — ending it dead as a doornail, leaving the throne open for Fiona’s daughter, Cordelia (Sarah Paulson).

But it looks like someone may have found a way to bring her back from the dead — or she’s joining some other late characters in the ghost realm — for the much-buzzed about next season.

Murphy took to Twitter Thursday to reveal the eagerly-anticipated crossover installment will arrive on FX this September. The news came as a shock to fans, as the series’ creator previously said the mashup was slated for Season 9.

Of course, we still don’t know-know if Emma (and Madison) are really returning for Season 8, or if it’s just a fake-out. Representatives for Roberts and FX didn’t immediately respond to a request for comment from TheWrap. But we’ll all find out tonight when Roberts, Murphy, Paulson and Evan Peters drop some “American Horror Story” news during a planned live-tweet of another Murphy FX series, “Pose.”