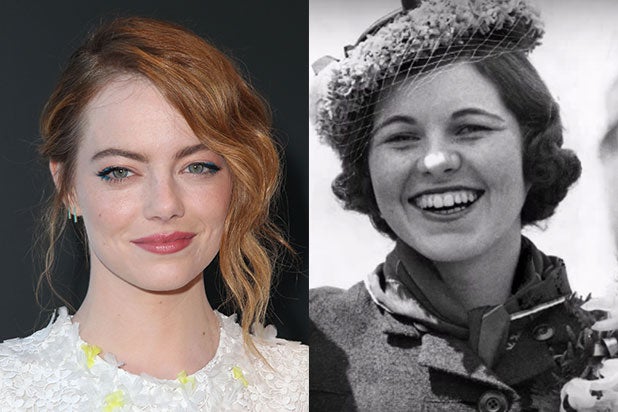 Emma Stone is attached to play John F. Kennedy’s sister Rosemary Kennedy in “A Letter From Rosemary Kennedy,” a script by Nick Yarborough that WME is currently shopping to studios and independent financiers, multiple individuals familiar with the project have told TheWrap.

Rosemary was the eldest daughter of Joseph and Rose Kennedy who suffered from intellectual disabilities and underwent one of the first prefrontal lobotomies at age 23, a procedure that went horribly wrong and left her with the mental abilities of a toddler. Her condition was long kept secret from the public — and even her own family — though it eventually inspired her sister, Eunice Kennedy Shriver, to found the Special Olympics.

“Letter” will focus on the final days of Rosemary Kennedy, who died in January 2005 at the age of 84.

Yarborough works as an assistant for Richard Arlook, who will produce the film with Allard Cantor and Jarrod Murray of Epicenter, who discovered the script on the Black List website. They now represent Yarborough along with Simon Faber and Tanya Cohen of WME.

“A Letter From Rosemary Kennedy” was selected as a 2015 Nicholl Semifinalist and a PAGE Screenwriting Contest Finalist. The project is expected to generate lots of interest in Hollywood.