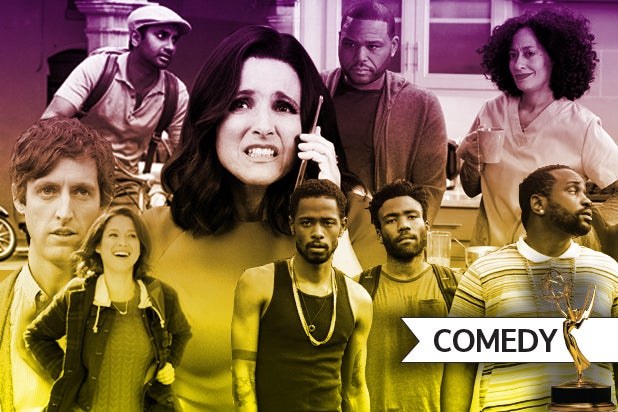 In contrast to the Emmy’s drama-series categories, where many of the hottest contenders are first-year shows, the comedy field is full of familiar series with a history of Emmy recognition: “Veep,” “Silicon Valley,” “black-ish,” “Transparent,” “Master of None,” “Unbreakable Kimmy Schmidt” and maybe even the five-time Emmy champ “Modern Family.”

That’s not to say that newcomer “Atlanta” won’t be a real contender, or that “Insecure,” “Dear White People” or even “Fleabag” couldn’t make a little Emmy noise.

A wild card: Lena Dunham’s “Girls,” which ended its six-season run with a well-received final season that might prompt Emmy voters to change their habit of mostly ignoring it.

It’s always risky to say that an Emmy category looks easy to call, but this one might just fit that bill. “Veep,” “black-ish,” “Transparent,” “Silicon Valley,” “Master of None” and “Unbreakable Kimmy Schmidt” should be repeat nominees from last year, and “Atlanta” should nudge out “Modern Family,” which has been losing the Emmy mojo it had in the days when it won this award for five years in a row.

Then again, Emmy voters have surprised us before with their lingering affection for “ModFam,” and it’s impossible to ever feel too secure in predicting what they’ll do.

They can’t ignore the new guy in town, “Atlanta” star Donald Glover, can they? But to fit him in, voters will have to get rid of one of last year’s nominees, most likely Will Forte from “Last Man on Earth.”

And while I love the IFC billboard that reads, “If OJ can get nominated, Jim Brockmire can too,” I’m not sure that the eminently deserving Hank Azaria can muscle in playing that oversexed, foul-mouthed baseball announcer in “Brockmire.”

Can Julia Louis-Dreyfus set a new Emmy record by winning six consecutive awards in this category? Yes, she probably can.

So who’ll get the honor of losing to Julia? Most likely it’ll be one newcomer, Issa Rae from “Insecure,” and a batch of returning nominees, including Tracee Ellis Ross from “black-ish” (the one who might actually have a slight chance of winning), Ellie Kemper from “Unbreakable Kimmy Schmidt” and Lily Tomlin from “Grace & Frankie.”

Let’s face it: Many of the top moments in a very politicized year for television might have come from Alec Baldwin playing Donald Trump on “Saturday Night Live.” The political show “Veep” could add a couple more nominees — certainly Tony Hale, perhaps last year’s nominee Matt Walsh or the scene-stealing Timothy Simons, who benefited from a substantial storyline.

Outside of the political arena, Brian Tyree Henry and Lakeith Stanfield from “Atlanta” might find it difficult to break into a lineup of past nominees.

Let’s face it, part 2: The top moment in a very politicized year for television might have been Kate McKinnon as Hillary Clinton singing Leonard Cohen’s “Hallelujah” on “Saturday Night Live” four days after Donald Trump was elected president.

With “Game of Thrones” and “Downton Abbey” out of the running this year, many categories could be dominated by first-year shows

"This Is Us," "The Crown," "Stranger Things" and "The Handmaid's Tale" are among the new shows that could flourish in the absence of two Emmy juggernauts.