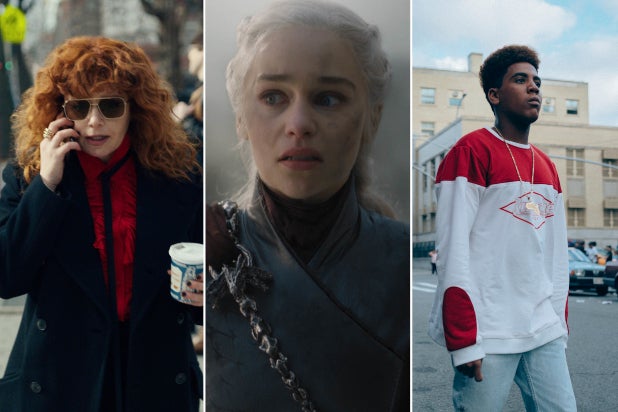 The 2019 Emmy Awards nominations are all accounted for, with HBO regaining the top spot with 137 nominations. Netflix, which ended HBO’s 17-year streak as the most nominated network, finished with 117 nominations.

Netflix, which didn’t have its top-two nominated shows from last year eligible this time around, was led by “When They See Us” (16) and “Russian Doll” (13).

Of the newcomers, HBO’s heavily-praised “Chernobyl” miniseries led with 19 nominations, followed by FX’s “Fosse/Verdon” with 17 nods. Showtime’s “Escape at Dannemora” drew 12 while “Our Planet” notched 10 nods. “Sharp Objects” pulled in 8 nods for HBO as well and “Free Solo” landed 7 for Nat Geo. “Succession” scored 5 nods, including Outstanding Drama Series, for its freshman season.

In terms of studios (HBO Entertainment is behind all of the network’s shows), the newly-formed Disney Television Studios accounted for 58 nominations, led by “Fosse/Verdon” (18) and “This Is Us (9). Disney TV Studios, which encompasses 20th Century Fox TV, ABC Studios, ABC Signature, and Fox 21, was formed following Disney’s acquisition of Fox’s TV and film assets. Universal Television drew 43 nominations, with “SNL” leading the way with 19 and “Russian Doll” with 13. Amazon Studios accounted for all 47 of Prime Video’s nominations — with “Marvels Mrs. Maisel” getting 20 of those.

FX Productions got 27 nominations, including “Fosse/Verdon” which was a co-production between FXP and Fox 21. CBS Television Studios finished with 27 nominations, while Warner Bros. TV had 23 and Sony Pictures TV had 21 nods.

Also Read: 15 Emmy Records That Were Broken by the 2019 Nominations, From 'Game of Thrones' to Ted Danson