The 2017 Emmy Awards nominations are all accounted for, and “Saturday Night Live” and “Westworld” lead the way with 22 nods apiece.

Meanwhile, newcomers “FEUD: Bette and Joan” and “Stranger Things” each pulled in 18 nominations this morning. “Veep” (17), freshman “Big Little Lies” (16) and anthology effort “Fargo” (16) were nipping at their heels.

A baker’s dozen opportunities to win a trophy for “The Crown,” “The Handmaid’s Tale” and “The Night Of” certainly isn’t anything to sneeze at either. “This Is Us,” “Genius,” “Planet Earth II” and “Silicon Valley” are the other programs with nomination tallies in the double digits.

As far as platforms go, even without any “Game of Thrones” episodes making this year’s Emmy-qualifying period, HBO’s 111 nominations keeps the premium-TV network at No. 1, staving off Netflix’s 91.

Last year, HBO boasted 94 nods, while Netflix had “just” 54. That 2016 starting point means the streaming giant jumped 68 percent above its last total — pretty good growth. AMC and PBS ended up on the undesirable end of that year over year spectrum.

NBC was again the top broadcaster, garnering 64 nominations this year. ABC, CBS and Fox lined up in just that order — though those networks ranked below cable’s FX.

Here’s a full snapshot of the tallies by program and platform: 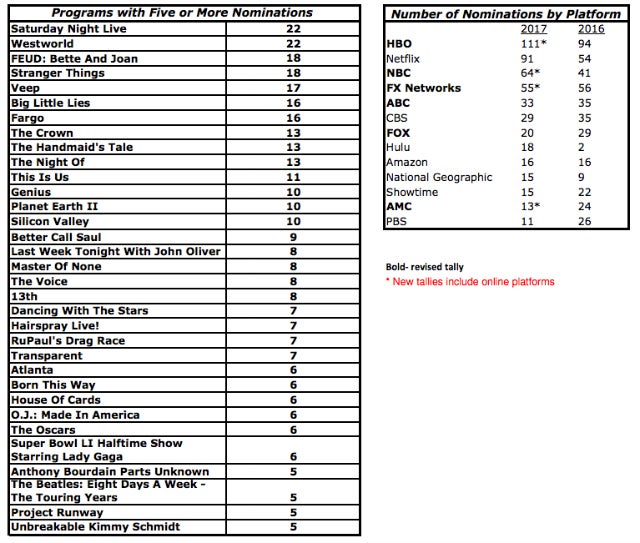