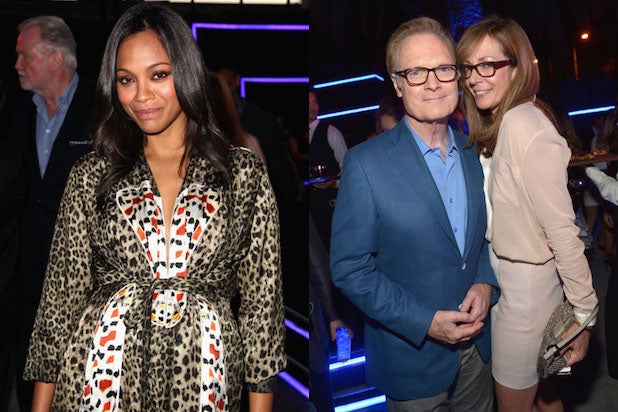 August is a month of Sundays.

With many decision makers beachside and fantasy football drafts sacking residual mental capacity, even the pre-Labor Day Emmys had yet to slide the industry out of professional neutral … until Thursday night.

Also read: Emmys 2014 Behind the Scenes: The Stylemaker Behind Emmys’ Golden Boys

The event attracted nominees Michelle Dockery, Aaron Paul, Tony Hale, Joe Morton, Jon Voight and Julie Bowen, along with friends of the luxury auto brand like Zoe Saldana and Jessica Pare to the hedged-in corner of Melrose and Robertson. It also drew a screaming female Taryn Manning fan to greet the A8.

With a two-tiered, blue-hued outdoor lounge that masked the Italian eatery’s usually non-festive valet, and talent and insiders sliced up by roaming bottle jockeys, it was an attitude adjustment that fired the starting gun for the parade through “the season.”

The bad news: “The season” runs for the next six months to the day, culminating with the Oscars on Feb. 22, 2015 at the Dolby Theatre.

But on Thursday night, it had that first day of school feel. Sarah Hyland lounged on the back of a couch as DJ Michelle Pesce clicked deep in her crate for Prince’s “Let’s Go Crazy” and “Let’s Hear it for the Boy.” One couch over, president of Audi of America Scott Keogh held down the corner table.

Guests picked at lobster ravioli, truffle risotto, tuna tartare and pizza as Pesce once again delivered the rare full dance floor — albeit without Eric Stonestreet captaining the space as he did last year. He showed, but gets a pass on account of an early call time on Friday.

Also, his “Modern Family” boss Steve Levitan was there.

Event producer Tony Schubert continued his streak of showing off his film school credentials in “shooting one room 10 different ways,” by hatching a new set up from the space that they have used several times already.

Also read: Emmy Parties Preview 2014: How to Spend This Week on a Champagne Diet

Upcoming “Drinking with the Stars” guest Josh Henderson (“Dallas”) wandered in from the Two Feet Project’s wine cave dinner over at Riva Bella, where I met “The Bachelor” winner Catherine Giudici earlier in the night.

Back at the other Italian dinner spot, two nominees were the last to slink off.

Longtime regular Michelle Dockery shut it down, as Julie Bowen thanked the traffic cop cordoning off Melrose to slip in to her ride and zoom off.

It’s only a dress rehearsal for her. She’ll be whisked back to the Nokia in one of an army of conspicuous Emmy-branded cars through Monday’s workday traffic.

Here’s to hoping the painted Emmy statuette decal on the side will get her a 3D golden version to pair with it on the ride home.