While numerous big celebrations are still full steam ahead to honor the nominees for the 71st Emmy Awards, 2019 marks a pulling back by many party-giving regulars. The reasons are varied, including a move by all the talent agencies to cancel their annual soirees, the consolidation of companies like Disney and Fox and the decision of Women in Film to donate the money they would have put toward a party to Planned Parenthood.

But never fear, there are still plenty of places to strut your stuff on the red carpet, nibble world-class bites, sip top-shelf spirits and the finest wines and even carry home some goodie bags while celebrating the best that the small screen has to offer. As always, these events are private and by invitation only.

Kicking off the nightly party rounds is LA Confidential magazine’s bash spotlighting Linda Cardellini, their Fashion + Emmys Issue cover celeb. She’ll be there and perhaps some of the other hot actors profiled inside, like 2019 nominee Lena Headey, Justin Baldoni, Reid Scoot and Laverne Cox.

The Television Academy joins forces with the DGA to honor all the director nominees with a reception that’s likely to draw all the biggest names, including “Game of Thrones” nominees David Benioff, D.B. Weiss, David Nutter and Miguel Sapochnik and “Barry” director-creator-star Bill Hader.

While some have cancelled annual parties, others are just beginning Emmy season traditions, like Australians in Film, who will inaugurate this luncheon honoring the achievements of Aussie women in television. InStyle Australia Magazine and handbag company State of Escape join in inviting everyone who’s anyone in Australian TV to Curtis Stone’s place for a meal and a chat with expected guests including Bruna Papandrea (“Big Little Lies”), Liz Flahive and Carly Mensch (“GLOW”) and other power players from Down Under.

Doris Bergman is a fixture on the luxury suite circuit that leads into Emmy weekend, enticing nominees to visit Fig & Olive for an afternoon of gifting and pampering. Usual fans include Bruce Dern and Jon Voight, who head home with bags full of swag, and 2019 nominee Glynn Turman is already on the RSVP list. This year’s got hot stuff like cannabis and CBD from Green Goddess Collective, as well as a limited edition mescal, all to make sure there’s fun to be had all weekend long.

DPA’s annual suite moves on up this year, from the Luxe Hotel BH to the larger spaces in its sister, the Luxe Sunset. There celebs on the list will find the “Friends” orange couch, ready for an Insta close-up, as well as Swiss watches, Canadian jewelry, Mongolian cashmere and – for the biggest stars who turn up, trips to Le Taha’a Resort in French Polynesia. That one is worth the drive up the 405.

The nominated producers get their own bash on Thursday night, with the Television Academy hosting the honorees for Drama Series, Comedy Series, Limited Series, TV Movie and more. The nominees receive their official certificate of nomination at the party as well, encouraging the idea that getting the nod is as important as getting the win. 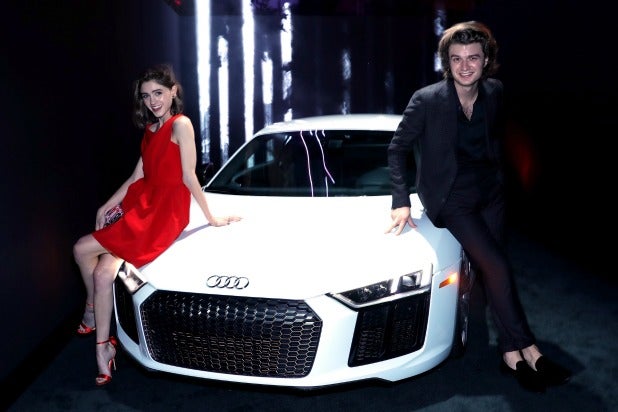 Audi’s party is always one of the highlights of Emmy week, with so many nominees and A-list stars wandering through that it’s hard to keep track. Moving to Sunset Tower this year (we still miss Cecconi’s, frankly), the official automotive partner of the Emmys have DJs Reggie Watts and Alexandra Richards getting the dancing going. And if it’s anything like their past parties, expect to see “Veep” nominees like Julia Louis-Dreyfus and Tony Hale blowing air kisses to “Modern Family” party regulars Ty Burrell, Jesse Tyler Ferguson and Eric Stonestreet.

Celebrating a milestone of their own, this marks the 15th year that the GBK Emmy Luxury Lounge has rolled into town. The A-list crowd forms for this one every time (think Viola Davis, Regina King) and this year Mrs. Maisel herself will again make the scene, as Rachel Brosnahan returns as an advocate for Covenant House, one of the two charities the event supports. Nominees and presenters can take home nearly $75,000 worth of swag, including trips to Raiwasa in Fiji and Sailrock Resort on Turks and Caicos, diamonds and Korean skincare products to help with that red-carpet ready look.

EcoLuxe Lounge fans include Chrissy Metz and Christina Milian. This year they and other celebs will find the main trend in gifting here, with a VIP CBD/Hemp lounge within the lounge, complete with wellness items for both humans and pets. Jamaican Tourism will hand out resort stays on that island known for its ganja, and there will even be a cannabis floral designer in the mix — gotta go see that one to figure out what that is.

Getting most of the Prime Time Emmy nominees into one place is quite a feat, but the Television Academy pulls it off every year with this annual gathering of the nominated actors in all categories. Even more impressive is how they pull off taking a huge group photo, too. Expected nominees include Patricia Clarkson, Sian Clifford, Jared Harris, Carice van Houten and many more. 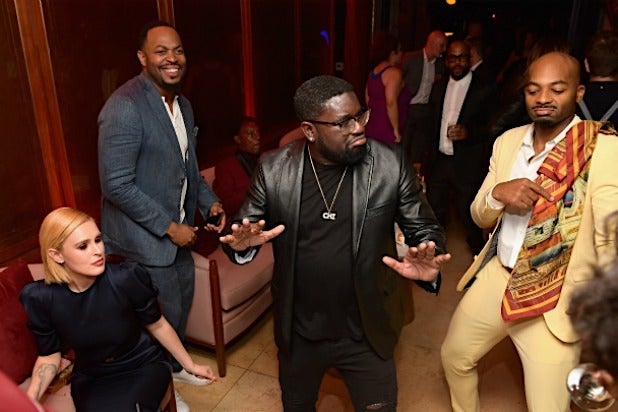 Entertainment Weekly (which is now a monthly) is back in 2019 with another hot-ticket party to start the weekend’s festivities. DJ Michelle Pesce will spin, Ferrari Trento will pour bubbly and L’Oreal Paris will offer touch ups and makeup swag to guests that often include Sterling K. Brown, Justin Hartley and Dascha Polanco.

Saturday’s swirl of parties begins early, as the Creative Coalition’s annual gala honors a collection of familiar faces that spend time giving back in one way or another. Honorees this year are Patricia Arquette, Henry Winkler, Terry Crews, Anthony Carrigan, Andrea Navedo and Bethenny Frankel, with a brunch hosted by Jeffrey Ross. Ryan Murphy, Tim Daly and other charitably-minded Hollywood honchos are expected, too.

AMC Networks starts partying early on Saturday, in honor of their 27 nominees, with this brunch that’s sure to include Cecconi’s signature truffle pizza. Nominees sure to turn up are Bob Odenkirk, Jonathan Banks and Giancarlo Esposito (“Better Call Saul”); Sandra Oh, Jodie Comer and Fiona Shaw (“Killing Eve”); and Rosamund Pike and Chris O’Dowd (“State of the Union”). 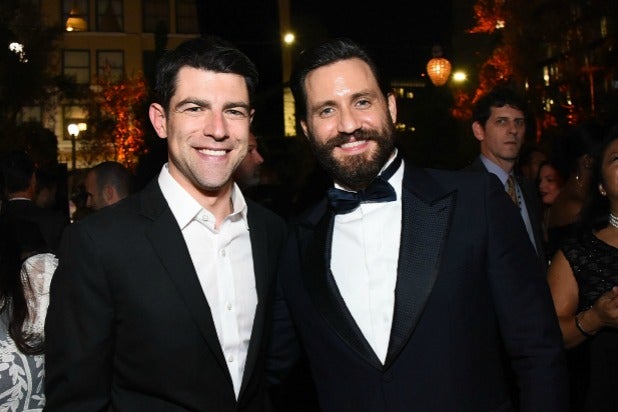 Also dining early on Saturday are the FX Networks, as they team up with Vanity Fair for a brunch in honor of their nominees. From Billy Porter and his “Pose” co-stars to Sam Rockwell and Michelle Williams, whose performances in “Fosse/Verdon” may just garner them both Emmy statues, one thing is certain: the crowd that forms at this one is going to be very well-dressed.

Perennially one of the best bashes of every Emmy season (and one of the toughest tickets to snag, too), the BAFTA Los Angeles Tea once again rolls into the Beverly Hilton pool this year, joined by BBC America for the celebration of all things British on television. If past years hold true, Sophie Turner and Maisie Williams will turn up together, Sandra Oh, Jodie Comer and Fiona Shaw will sip tea and eat cucumber sandwiches, and Ru Paul will tower over the oh-so- British crowd that’s intent on getting their next G&T at the bar.

Also Read: Here's How Long It Would Take to Binge-Watch All the Emmy-Nominated Shows 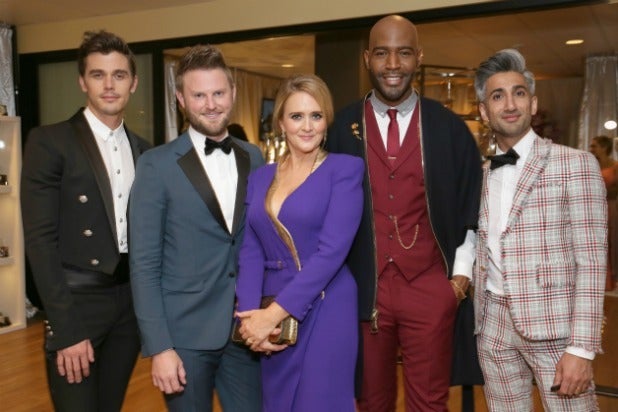 The first round of evening cocktails and bites happens at the Canadian Consul’s home, where toasts to Samantha Bee and her “Full Frontal” team will enliven that country’s rejoicing over numerous 2019 Emmy nominations. Other Canadians who got the nod this year include Sandra Oh for “Killing Eve” and the “Schitt’s Creek” gang, led by Eugene Levy and Catherine O’Hara. This one is always a foodie’s delight, so it’s a great place to fill up before moving on.

Ferrari Trento is once again the official sparkling wine of the Emmy Awards, so that Italian wine producer has again also popped up with their Ferrari Trento Villa. That’s the place where movers and shakers from nominees to presenters to lovers of “The Italian Art of Living” can toast to the last night of not knowing who the big winners are at the 71st Emmy Awards.

For the 13th annual “Evening Before,” actors, directors, writers, producers and many others in key roles in television production meet to help raise monies for the Motion Picture & Television Fund (MPTF). With the help of sponsors Delta Air Lines, Netflix, People Magazine and Target, this casual party supports the MPTF’s retirement facility in Woodland Hills as well as the org’s other programs aimed at those in the industry that are in need.

Also Read: Here's Why James Corden Is King of the Emmys This Year

All the funny people from Comedy Central plan to gather high up in the sky at the Highlight Room at the Dream Hotel, for a chance to howl at the moon in anticipation of Sunday’s awards. That includes nominees Trevor Noah, “Drunk History” creator and host Derek Waters, and Abbi Jacobson and Ilana Glazer, whose “Hack into Broad City” takes Short Form Comedy to new heights. 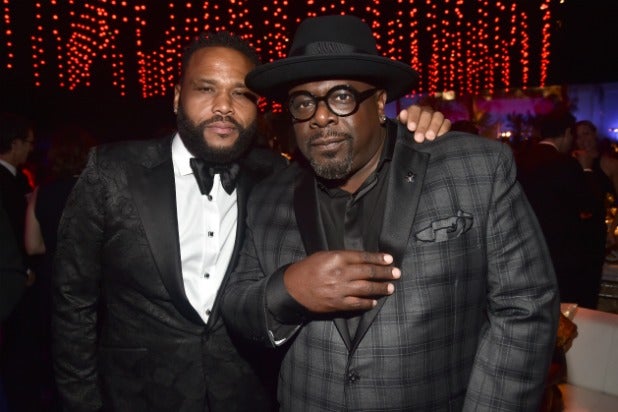 At the Television Academy’s Governors Ball right after the show, those with the golden ticket (all 3,700 of them) enter a wonderland filled with luscious bites by Patina’s Joachim Splichal and wines from Sterling Vineyards, bubbly by Ferrari Trento and top-shelf spirits from Diageo. Inside there’s music, dancing and lots of couches for canoodling. Winners are all likely to make this scene, for it is there that they get the nameplate that confirms their victories affixed to their awards.

With so many of Disney’s networks combined into one party, this one may just burst the seams of Otium, Chef Timothy Hollingsworth’s place. With “Fosse/Verdon” stars Michelle Williams and Sam Rockwell leading the 32 FX Networks nominations, Hulu’s “The Handmaid’s Tale” up for 11, National Geographic with 13 and Disney TV Studios up for numerous awards across animated series, sitcoms, dramas and more, this is going to be one packed party. 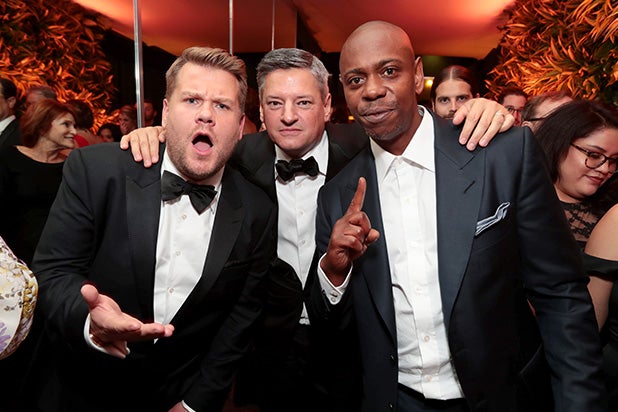 Netflix’s juggernaut of taking over what the world watches means they’re going to party like rock stars on the 117 nominations the streaming service garnered this year. And if “Russian Doll” or “Ozark” comes out on top, expect dancing on the ceiling in this massive party space at Milk Studios.

This year’s Amazon Prime party is all about the women, as “Mrs. Maisel” and “Fleabag” mark the streamer’s top contenders from its Amazon Originals division. So win or lose, we’re confident that Phoebe Waller-Bridge and Rachel Brosnahan and all of their show cohorts from co-stars to show runners will be crammed into the Chateau Marmont’s always-too-small garden. Hugh Grant and Ben Whishaw may be joining the celebration, too, for their fine work in “A Very English Scandal.” 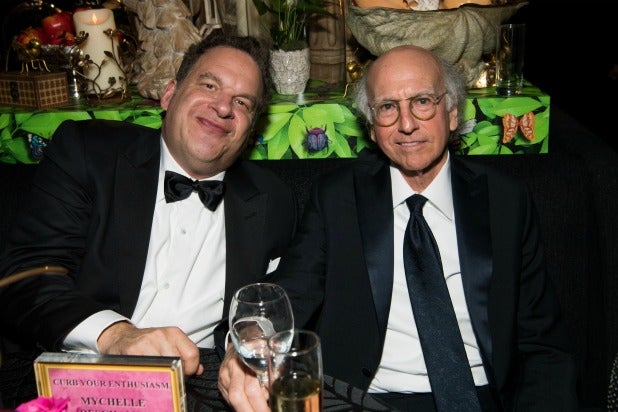 The mother of all post-Emmy parties, HBO is back at the Pacific Design Center once again, with what is sure to be a “Game of Thrones” blowout the likes of which Westeros has never seen. With a network-topping 137 nominations, the HBO stable of stars will be out in force, having a final feast to say a tearful last goodbye to “Thrones” and “Veep.” It’s bound to be an over-the-top celebration peppered with, “I’m not crying, you’re crying!”