The old cliche “I love all my children equally” apparently applies to multiple personality disorder. 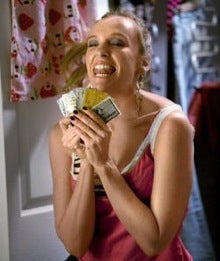 “I love them all!” said best comedic actress nominee Toni Collette, when asked Thursday which persona on Showtime’s “United States of Tara” she likes playing best.

Well then, which was most challenging? “Initially, I was nervous about Buck,” she added, referring to lead character Tara’s beer-swilling masculine alter-ego. “I didn’t want him to be too cliche or laughable. But that (anxiety) dissipated after a while. It was just a matter of getting in a room with the other actors and saying my lines.”

“Just like last year, we’ll be a month and half into production,” said the “Breaking Bad” star, who stays thin and bald to play a late-stage cancer sufferer. “I’ll be bald and emaciated again. There’s a discipline to it. Like anything, once you get used to it, you cease to feel deprived. You know it’s right for the character and right for the show, and you know it’s for a good cause.”

“This is so unbelievable — it feels like I’m living some crazy dream,” said Cranston’s co-star Aaron Paul, also nominated Thursday for “Breaking Bad.”

Moving as a regular on HBO’s “Big Love” to the AMC series several years ago, Paul conceded he didn’t know what to expect.

Paul added that “Breaking Bad’s” second campaign had distinct advantages over its first, which produced a lead actor Emmy for star Bryan Cranston.

“In season two, we had much more room creatively, because we got our full 13-episode order and we weren’t cut short by a writer’s strike,” he explained. “There was room for more character development across the board.” 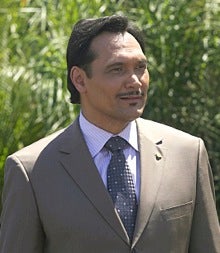 Gaining guest actor recognition for his role last season as assistant district attorney Miquel Prado on Showtime’s “Dexter,” Jimmy Smits said the work helped him get over the cancellation of the Cuban immigrant-themed “Cane.”

The show was one of several ABC dramas launched in 2007 but ultimately upended by the strike.

“In a lot of ways, there’s a bitter-sweet taste to this,” Smits said. “I got to do another iteration of this South Floridian guy and get it out of my system.”

HBO’s “Grey Gardens,” grabbing 17 nominations including best TV movie, benefitted from a surfeit of research materials, according to Patricia Rozema, who co-wrote the script with Michael Sucsy.

“It was basically an embarrassment of riches,” said Rozema on Thursday morning, after learning of her nomination. “My task was to streamline it all into a clear story. We had so much information available.”

To their benefit, Rozema and Sucsy had full access to dailies shot 34 years ago by legendary documentarians Albert Maysles (an executive producer for “Grey Gardens”) and his late brother, David.

At the time in 1975, the brothers created a groundbreaking nonfiction film focused on the sequestered life of squalor being led by society outcasts Edith Bouvier Beale and her daughter, played in the HBO film by Jessica Lange and Drew Barrymore, respectively.

The screenwriters also found a journal kept by the younger Beale, known as “Little Edie,” that among other things offered details about a long-lost boyfriend not referenced in the Maysles documentary.

“It was difficult to wrestle all of this into a taut story,” Rozema noted.

“We’ve had double-digit growth in all the key demos we care about year to year,” Collier notes. “You look at the demos on ‘Mad Men,’ and it might be the most upscale show on television.

Before co-creating CBS’ “How I Met Your Mother,” which was Emmy-nominated Thursday for best comedy, Carter Bays says he already had an established Emmy routine worked out while serving on the writing staff of the “Late Show with David Letterman” several years ago.

“We would get nominated every year then lose to ‘Jon Stewart.’ It was nice,” he said. Indeed, Comedy Central’s “Daily Show with Jon Stewart” has been dominant in Emmy’s comedy/musical/variety categories, winning the series trophy the last six years.

“I am a lucky bastard,” said Katz. “For a first-time director, Kevin is one of the greats to have around. The two of us together were able to figure out how to get throught this shoot. Having him around was really, really important for me.”

Other reactions heard around town:

"I think there are many parts that make it so appealing," Jessica Lange told Variety about "Grey Gardens." It is such a human story, and there is something so touching about their relationship. It is combination of many things but comes off as such a universal story and really was an actor’s dream to play this part."

"She is such a buffoon. People kind of dig her, and it makes them feel better about themselves," "The New Adventures of Old Christine’s" Julia Louis-Dreyfus told Variety. "When you compare her to someone like Elaine (from "Seinfeld"), she is better-intentioned, which makes her tragic in a funny way."

"Damages" nominee Glenn Close told the Hollywood Reporter that she was ironing when the nominations were announced.

"I’m thrilled the whole show has gotten something, but I wish the writers had as well because I wouldn’t have been nominated without the writing they give me."

Close added that the nominations she and the show received for its second season illustrate that the drama isn’t just a "flash in the pan." "To be nominated for the whole show is kind of validating for the entire team and what we all produce together." As for her plans to celebrate, Close joked that she "has some beds to make" and that "every day is a celebration as far as I’m concerned."