“Angelyne,” the series about the local LA icon of the same name, has a premiere date on Peacock.

As it dropped a teaser — featuring an unrecognizable Emmy Rossum in the title role — the streamer revealed the show will premiere May 19.

The show is “about fame, identity, survival, billboards, Corvettes, lingerie, men, women, women teasing men, men obsessed with women, West Hollywood, crystals, UFOs, and most importantly of all, the self-proclaimed Rorschach test in pink, glow-in-the-dark queen of the universe, Angelyne,” per Peacock.

Angelyne had billboards bearing her name up all around LA in the mid-late ’80s and early ’90s. She was infamous for being spotted around town in her trademark pink corvette. 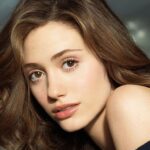 Rossum, via her Composition 8 company, is an executive producer. Allison Miller is the showrunner and an EP. Lucy Tcherniak is an EP and a director. Matt Spicer also directs.

“As a society broadening our understanding of identity, this story plays with large questions. Are we defined by the historical facts of our life? Or can we define ourselves? To self-actualize, to embrace whoever we are on the inside and live whatever truth feels most accurate,” Rossum said in a statement. “When everyone’s experience of reality and truth is personal, can there ever be one true story? I’ve spent the better part of 4 years thinking, living, and breathing this project. I love Angelyne. She’s as if Marilyn Monroe got into an easy bake oven with a 80s punk Barbie Doll, and a dose of new age spirituality. She’s a trailblazer, a hustler, a visionary, the original influencer, a living-breathing piece of art. Here is a little taste of the show. I hope you fall in love with her magic.”

Other EPs include Sam Esmail, via his UCP-based Esmail Corp, Chad Hamilton, via Anonymous Content, and The Hollywood Reporter. 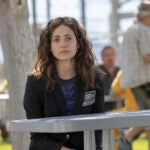 Gary Baum, who wrote the article on which the series is based is the show’s consultant.

The show is produced by UCP, a division of Universal Studio Group.

“Angelyne is an homage to the Real Angelyne who became a cultural icon in Los Angeles. This isn’t the true story of Angelyne,” Miller said in a statement. “It’s not a straight forward biopic. It’s a story inspired by everything Angelyne represents and so it’s a magical story, a hopeful story, a story about becoming the person you were meant to be and believing in your own inner strength to manifest your dreams. It’s a story about Los Angeles and everything the city means to people who move here and to people who dream about moving here.”