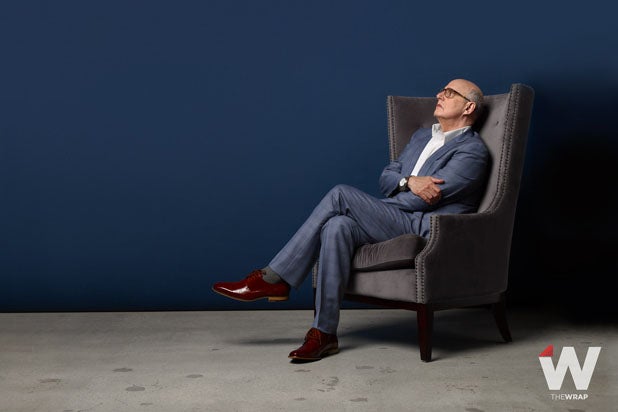 Jeffrey Tambor is staring down a bottle of red nail polish.

The shiny glass container and its contents are making the “Transparent” star uneasy. Should he don polish for a Wrap magazine cover shoot or keep his nails as they are?

“These are the kinds of things I worry about,” he confesses. “The small things. I need to be sensitive to the community.”

His concern over nail paint is indicative of a good year. At 70, Tambor has defied the odds for the third time in his career to become the breakout star of yet another innovative television series, this time as a matriarch.

In Amazon’s groundbreaking series, Tambor plays Mort Pfefferman, the bumbling head of an upper middle-class Jewish family in L.A. rocked by the news that he is transitioning to female. His children adjust to the notion that Dear Old Dad is becoming Maura over the course of the first season’s 10 episodes, which began streaming early last year.

“At 70 years old, I was given the greatest role of my career,” Tambor says. “I was also given one of the greatest responsibilities of my personal life. So I have to do it right.”

Amazon’s show debuted at a time of growing advocacy for the estimated 700,000 transgender individuals in the United States, who until recently were marginalized in both the human-rights struggle and in depictions on screen. Thanks to high-profile trans figures like Chaz Bono, the son of Cher and the late Sonny Bono, and “Orange Is the New Black” star Laverne Cox, who graced a Time magazine cover a few months after “Transparent” debuted, the movement had already advanced significantly before former Olympic athlete Bruce Jenner’s game-changing April “20/20” interview in which he declared, “I am a woman.”

Tambor and show creator Jill Soloway (above on set) were in the spotlight even before January’s Golden Globe Awards, when they went in as underdogs but took home awards as Best Actor and Best Series, Musical or Comedy. It was an especially sweet victory for Tambor, who previously earned six Emmy nominations for “The Larry Sanders Show” and “Arrested Development” without ever winning, and a huge breakthrough for Amazon’s aggressive push into television-style programming.

“It’s just so fulfilling to play this role, in this venue, about this subject,” says Tambor. “It’s a trifecta. I can’t think of distributing it any other way than the way we’re doing it. The people at Amazon are just gutsy and bold.”

The character’s revelation shakes up her children, played by Amy Landecker, Jay Duplass and Gaby Hoffman as Silver Lake narcissists with their own relationship issues; ex-wife Shelly (Judith Light) also has her hands full with an ailing mate. As the season unfolds, viewers learn more about Mort’s unhappiness as a husband and father before he began transitioning to his identity as Maura.

“I think she’s a better parent now than she was as Mort,” Tambor says of the character. “She’s authentic. What she’s doing, she’s leading them…the lesson of being authentic and going for freedom generates a very good thing in the kids.”

Tambor immediately responded to the bittersweet humor in Soloway’s writing, which is informed by personal experiences with her own father. “I was eight pages into the first script and I said, ‘I’m in,'” he says. “I mean, I threw myself at Jill.”

The showrunner suggests that the role has also freed Tambor as an actor. “There’s something about Jeffrey where Maura really embodies some very true part of him,” Soloway tells TheWrap. “Maura unleashes this beautiful thing in him. He has always reminded me of my parents, just being Jewy, soft, funny, sweet, vulnerable.”

He felt vulnerable on the set, too, Tambor admits. “I would say that I had a nervosity, and an insistent self-tapping on my shoulder at all times,” he says. “For instance, when I come out to my eldest daughter, I was shaking. I was throw-up nervous when they knocked on my door and said, ‘We’re ready for you.’ I had to get that scene behind me, because it’s so important that you do it right.”

The fact that the trans community has been largely unexplored on television upped the stakes for Tambor, best known for playing satirical characters. “My acting teacher said, ‘When you act, you act as if your life depends on it,'” says Tambor. “And here, lives are dependent on this.

“There’s phobia, there is hatred, there is absolute danger. We hear about it all the time. There’s suicide. The numbers are staggering, and I don’t think those are the real numbers — there’s compensation loss, work discrimination.”

Talk turns to the Emmy race and those sought-after trophies. The actor welcomes the spotlight for the show, which has been seen by the fraction of the audience that views a network hit, and the community.

“Recognition matters in this way to me, that we are the little engine that could,” he says. “We are Amazon. We are not Warner Bros. Any light of recognition that we can get, I am all for.

“Also, the subject matter needs light and love and understanding. The Golden Globes, I saw it happen even on social media, that people started watching it! Not in the, ‘Aren’t I so cool?’ sense.”

In a series brimming with laughter, catharsis and the joys of family dysfunction, the standout moments are often beautifully small, subtle and sweet. Take a Shabbat dinner late in the season, where Maura is invited to light the candles and pray before the table — a role reserved for the woman of the household in the Jewish faith. It’s a first for Maura and anyone who knew her as Mort.

The weight of the moment, with Maura laying a lace kerchief over her head and lighting two tapers in song, finds the perfect comic relief when her dinner guests point out she’s singing the wrong prayer. “It’s so funny that I was singing the Shabbat song wrong, and I’d been doing it wrong for 50 years. And that’s the genius of Jill! She said, ‘That’s not the song!’ You’re singing the Hanukkah song!’ Jill said to leave it in because that’s what Maura would do.”

Back at TheWrap cover shoot, Tambor places a phone call to one of the show’s transgender consultants, explaining quietly, “I need to make sure this is sensitive to the community.” But when the consultant tells him that the painted nails would be a subtle and fitting tribute to Maura, his mood lifts. The lacquer immediately takes on a heavier symbolism, and Tambor embraces it as wholeheartedly as he has embraced his unexpected return to the spotlight in a show that, as much as anything, is about the irresistible pull of living in the truth.

“Did I know what I was getting into?” he asks. “You don’t really think that way. But I remember many times talking to Jill. We’d be in the middle of a scene and I would say, ‘Oh, this is so big.'”