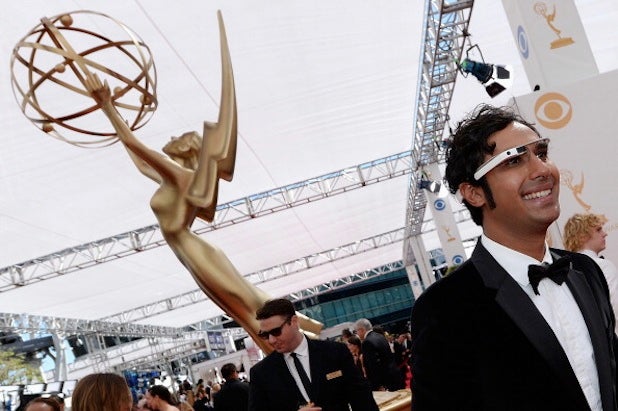 It’s a brisk afternoon in Los Angeles, but the red carpet outside the 2013 Emmy Awards is heating up.

Nominees like Tina Fey, Ty Burrell, Bryan Cranston, Anna Gunn and Jesse Tyler Ferguson are working the haute coutre in advance of the hardware handing out.

Tracy Morgan, Anna Paquin, Zosia Mamet, Aubrey Plaza and Zooey Deschanel are also on hand and as the clock ticks down to the show’s opening more stars are bound to strut their stuff for the cameras.

The awards telecast kicks off at the Nokia Theatre in Los Angeles at 8 pm ET/5 pm PT with Neil Patrick Harris returning to emcee television’s biggest night for the second time. Traditionally, the Emmys have overflowed with upset wins and shocking snubs. Within a few hours the answers to several big questions will become clear.

Will “Breaking Bad” finally capture the award for Best Drama? Will “Mad Men”s’  Jon Hamm prevail against previous winners Bryan Cranston from “Breaking Bad” and Damian Lewis from “Homeland” to score his first statue? Will Kerry Washington become the first African American to win the Best Actress prize for portraying a morally compromised fixer on “Scandal”? Will Emmy voters remember how much they once loved “30 Rock” and honor the backstage comedy for its well received farewell season?

Keep checking back with TheWrap for all your Emmy coverage.