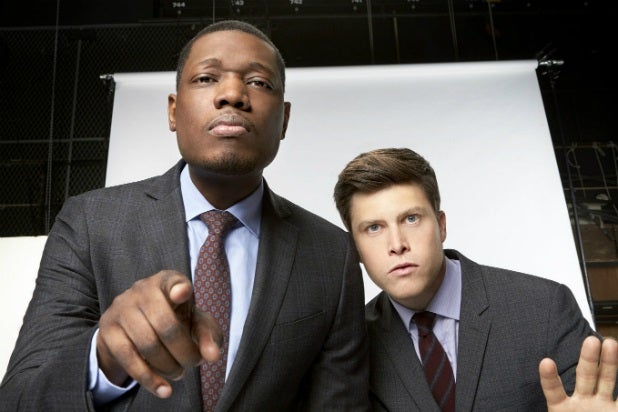 Che and Jost are best known as the co-hosts of Weekend Update on “Saturday Night Live,” a job they’ve held for the past four seasons. They spend most of that segment each week rapid-firing jokes in headlines and story summaries. More than a few of the jokes have been pretty overtly political over the last two seasons, with the two hosts blasting Donald Trump, first as a candidate in the 2016 presidential election, and then as president.

The Emmys actually started with another pair of “SNL” actors — Kenan Thompson and Kate McKinnon — who kicked things off a song about the Emmys this year are the most diverse ever. “We solved it,” McKinnon and Thompson sang, referring to Hollywood’s problem with diversity, in a number that featured Sterling K. Brown, Kristen Bell, Titus Burgess, Ricky Martin, Andy Samberg, RuPaul and John Legend.

Here’s a smattering of the very best gags from Che and Jost’s turn as Emmy hosts.

“This year the audience is allowed to drink in their seats, because the one thing Hollywood needs right now is people losing their inhibitions at a work function,” Jost said, continuing the riff on #MeToo.

“If you’re a network executive, that’s the scariest thing you could possibly hear, other than ‘Sir, Ronan Farrow is on Line 1,'” said Jost, after talking about how Netflix, a contender at the Emmys, was adding more original programming to its streaming service.

Talking about Laurie Metcalf’s Emmy nomination for Outsanding Supporting Actress in a Comedy Series for “Roseanne,” Che quipped, “You know how great an actress you have to be to get nominated for ‘Roseanne’ now? That’s like a cop being nominated for a BET award. It doesn’t happen!”

“The Obamas now even have their own production deal at Netflix. And my dream is the only thing they produce is their own version of ‘The Apprentice,’ and it gets way higher ratings,” Jost said.

Talking about a new slate diverse shows and reboots coming to TV soon, Jost said, “It’s gonna get balanced out by an all-white reboot of ‘Atlanta’ called ’15 Miles Outside of Atlanta.’ And it focuses on white women who call the police on the cast of ‘Atlanta.'”