Wedding bells are in the air!

During his acceptance speech for Outstanding Directing of a Variety Special for “The Oscars,” Glenn Weiss proposed to his girlfriend Jan Svendsen, who was in the audience.

The crowd inside the Microsoft Theater immediately started cheering, and a stunned Svendsen headed to the stage.

“This is the ring that my dad put on my mom’s finger 67 years ago,” he continued. “And to my sisters and brothers, I didn’t swipe it. Dad knows I have it, OK? I want to put this ring that my mom wore on your finger in front of all these people and in front of my mom and your parents watching from above. Will you marry me?” 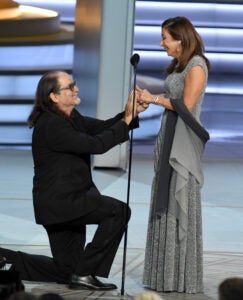 Svendsen said “yes” — and the proposal will go down in Emmys history as the first to broadcast live on air. Congrats!