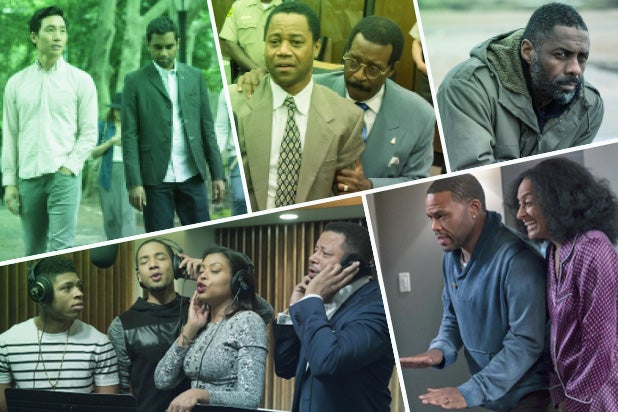 When the Emmy nominations were announced Thursday morning, it was clear that the Television Academy has again sidestepped the thorny race problems that have long plagued the movies, a problem symbolized by the #OscarsSoWhite protest.

A number of TV programs with racially diverse casts were honored in major categories, including ABC’s sitcom “black-ish,” FX’s docudrama “The People v. O.J. Simpson” and Netflix’s dating comedy “Master of None.”

In the lead drama actress category, Taraji P. Henson will again face off against Viola Davis (who won last year), even though last year’s initial buzz over their shows, “Empire” and “How to Get Away With Murder,” has long since died down.

In the lead comedy actor race, Anthony Anderson of “black-ish” (pictured) will face off against first-timer Aziz Ansari of “Master of None.”

The nominations underscore the larger point that television on the whole tends to be more diverse than movies.

Partly that’s due to sheer size. An explosion of programming on recent years – including streaming outlets such as Amazon and Netflix – has led producers to seek out stories that represent a broader constituency.

Television has more freedom from many of the severe financial constraints that have forced movie studios into churning out high-risk, mega-budget franchise pictures.