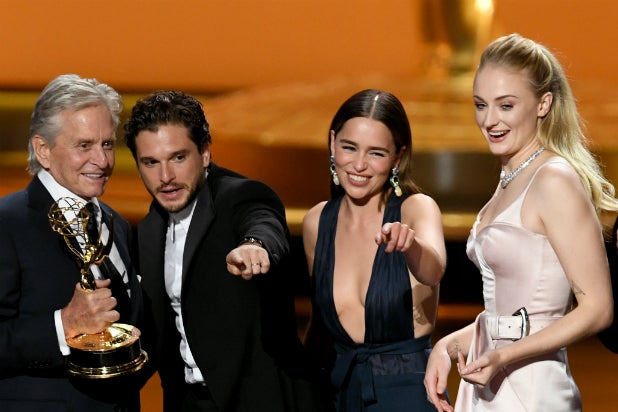 The 71st Emmy Awards drew 6.9 million total viewers last night on Fox, according to Nielsen. It got a 1.6 rating among adults 18-49.

That means the annual special shed roughly one-third of its audience (-33% in the demo and -32% overall) from last year. NBC’s turn on a Monday in 2018 established the awards show’s prior lows of a 2.4 rating in the key demo and 10.2 million viewers overall.

The special declined 22% from last year, when the best-of-TV celebration received a 7.4 — that had set the previous all-time low. That number clearly got obliterated (in the wrong direction for Fox and the Television Academy) this year.

Last year’s Emmys aired Monday, Sept 17, 2018 on NBC, and were hosted by “SNL: Weekend Update” anchors Colin Jost and Michael Che. This year’s ceremony was hostless, and a bit of a mess.

Also Read: Emmys by the Numbers: HBO Holds Off Streaming Surge With Final Season of 'Game of Thrones'

The 2018 Emmys didn’t go up against primetime NFL football on broadcast television like these did. Sunday’s special battled with “Sunday Night Football” on NBC (which had a 12.8 overnight rating), almost pre-guaranteeing this unfavorable outcome for the Emmys. (“Monday Night Football” on cable channel ESPN, which the Jost/Che Emmys faced, is much lower rated than “SNF” on NBC.)

It actually could have potentially been worse, but the 2019 Emmys almost surely benefited from their excellent lead-in.

Ahead of the ceremony, most of the country watched the New York Giants come back from behind to defeat the Tampa Bay Buccaneers in dramatic fashion. The NFL, the No. 1 media market in the country, a rookie quarterback making his first start in Daniel Jones, and a down-to-the-wire contest offered pretty much the best start possible.

Plus, having — and rewarding — the final season of “Game of Thrones” couldn’t have hurt either.

Final Emmys numbers — including total viewers — are expected to be reported later on Monday. Find the full list of winners and nominees here.

The Emmys rotate around the Big 4 broadcast nets.

The Best and Worst Moments of the 71st Emmy Awards (Photos)

You had one job, Homer Simpson

With the 2019 Emmy Awards in the can, here are some of the highs and lows of this year's awards show.