Before Sunday’s Emmys telecast, TV industry’s stars and producer are in round-the-clock social overdrive at parties, suites and precursor awards. Here are TheWrap’s top moments and sightings from around Los Angeles on Emmys weekend. 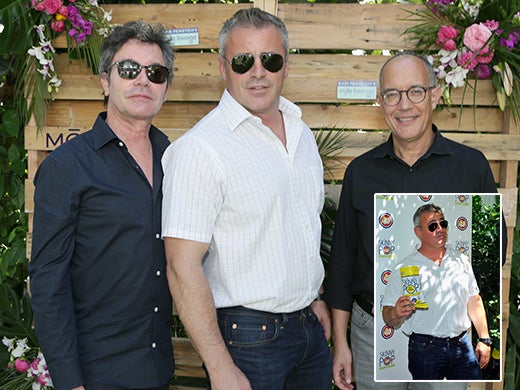 I’ve seen this episode before!

Matt LeBlanc brings a pivotal scene from the recent season of his Showtime hit “Episodes” to life.  On screen, he had to bribe his producers by taking them to a Golden Globes gifting suite to go swagging. On Friday, he brought his real producers to not one, but two gifting suites: Kari Feinstein at the Sunset Marquis and On3 at the London.

Also Read: Why Emmy-Nominated Scientology, Kurt Cobain Docs Could Be Overlooked by Oscars 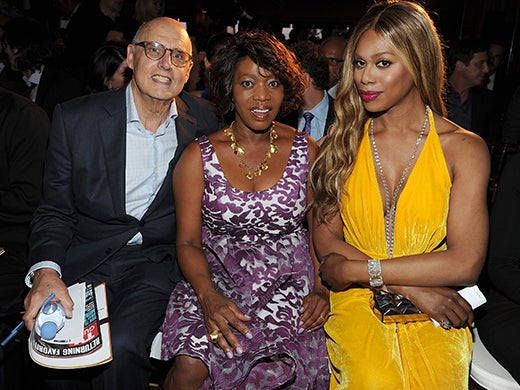 Eat your heart out fashion week. The front row at the first ever TV Industry Advocacy Awards trumped you. 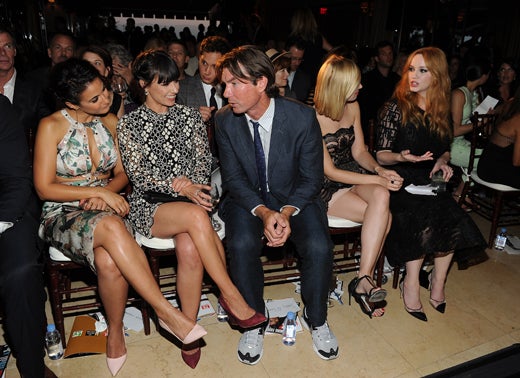 7:32 p.m. Sunset Tower: Monica Lewinsky, while President Clinton is nearby in downtown

“(Alan) will bravely suggest when to get out of your own way and when to steer clear of a new romantic interest…..if only I had met him a few years earlier,” Lewinsky cracks, landing big with the joke.

I’m obligated to mention that at the same time, President Bill Clinton was only a few miles away, celebrating the opening of the Broad Museum downtown. 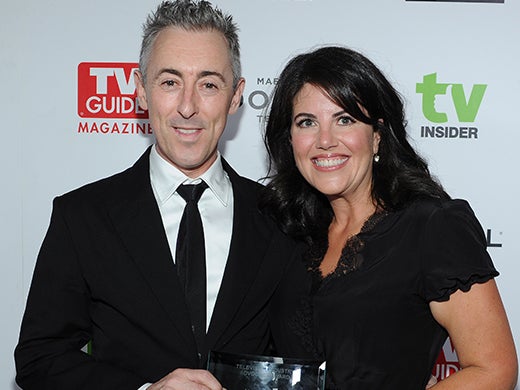 That would and should be my only salacious beat in what Robin Bronk, the Creative Coalition, and TV Guide Magazine/TV Insider pulled off – a refreshing sanctuary from the back patting and navel gazing on an awards weekend that brought Beth Behrs, Constance Zimmer, Alfre Woodard to tears in discussing their philanthropic work within the safe confines of a curated, non-partisan gathering of creatives who care about more than their headshots.

Pablo Schreiber, speaking for Tim Robbins who was on location with his own charity work with the Actors Gang Prison Project, spoke best for the group when he said, “I’m leaving here inspired.” 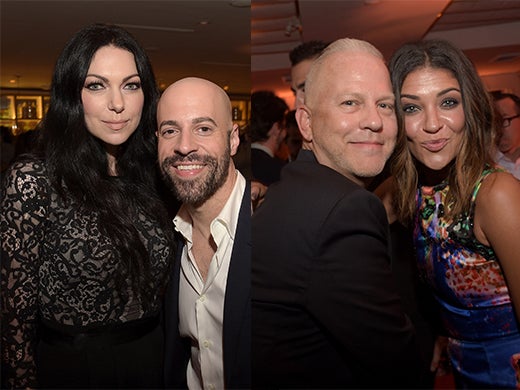 TV Guide will have all the highlights in a video stream at some point – like Beth Behrs admission that Christina Hendricks co-signed her Forever XXI wardrobe when she was shooting the “2 Broke Girls” pilot and living in a shared one bedroom apartment, Michael Schneider’s suggestion that Eva Longoria should convert her activism in response to Donald Trump’s Latino targeting in to a “Longoria/Tambor 2016” presidential ticket, and Constance Zimmer‘s tales of washing homeless feet before her big break.

Packed butt-cheek to butt-cheek on wooden chairs like a school assembly, the intimacy of the two hours allowed for rare candor that you won’t see on the Emmys stage. The producers would be smart to keep this tone in the future as with the now proven talent and industry appetite for an event like this in this particular awards weekend window, the sponsors (Maestro Dobel Tequila was in first) and industry machinery will be lining up to inflate the next “Television Industry Advocacy Awards Gala,” a mouthful of a name that became a recurring gag throughout the night. 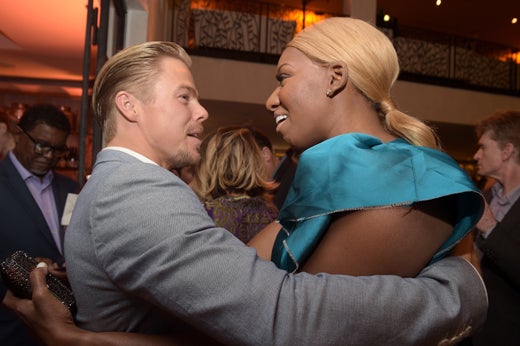 Already an Emmy winner, Derek Hough’s hair got the whip, and now he does the “Nene”. Hough and Nene Leakes (Jason Kempin/Getty Images for Entertainment Weekly)

The invisible stamp to get in to the Entertainment Weekly’s party is a heart drawn on the inside of your wrist. It’s a smart way to control access without any clashing temporary tattoos showing up in photos. After agency parties and other commitments, this is where talent came to drink, smoke way less than normal, and relax. 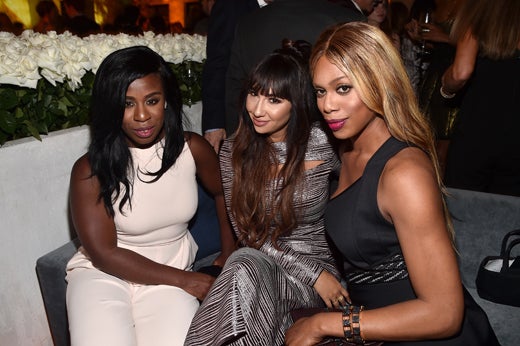 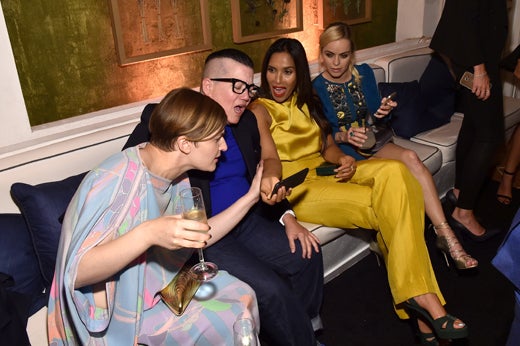 Due to their rare L.A. frequency (they shoot in New York), the quantity of cast members, and their outright popularity, the Litchfield women dominated this party. In one corner, the prime couches near the entrance and in the other corner in the back room,  Taryn Manning and the aforementioned DeLaria. 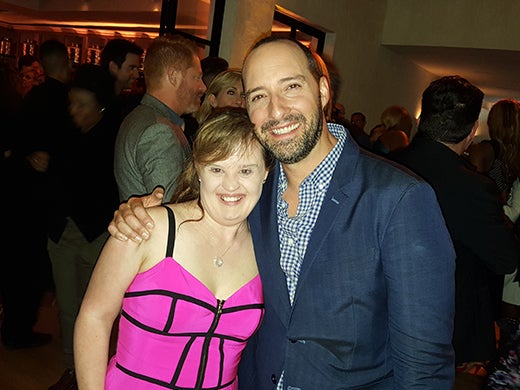 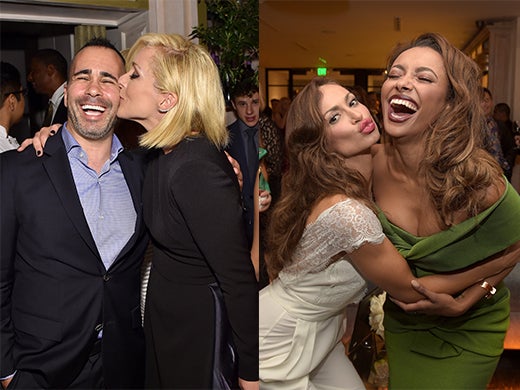 EW’s Henry Goldblatt gets the love from Jane Krakowski; Karina Smirnoff knows a special K when she sees one: Kat Graham. (Getty Images)

12:11 a.m. Friday night/Saturday morning The lights are up at Fig & Olive, the DJ has wrapped, and some of the producers of the event have already headed out. What was the “Orange is the New Black” couch is still packed and remains a social hub. Outside on Melrose Place, fans and autograph hunters are still flooding the sidewalks, waiting for Taryn Manning. 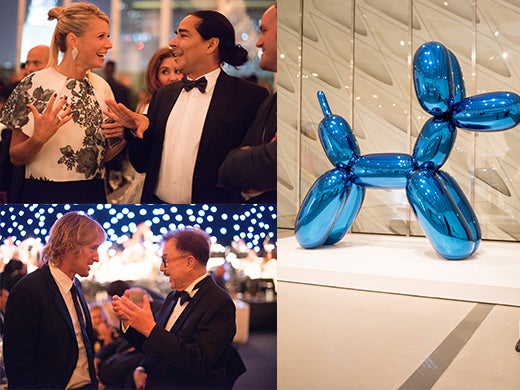 Gwyneth Paltrow, Owen Wilson, Michael Chow, and a contemporary take on the balloon puppet amongst the luminaries at The Broad on Thursday, September 17. (Ben Gibbs/Nick GinGold for The Broad)

As Emmy parties ramped up in West Hollywood on Thursday night, a flock of the heaviest hitters – contemporary artists, Oscar winners, billionaire philanthropists, and Ari Emanuel and Michael Lynton – opened Eli and Edye Broad’s new contemporary art museum with a black tie gala dinner. A 50 person orchestra performed to christen the museum that NPR called Broad’s “gift to Los Angeles.” It opens to civilians on Emmy Sunday, and it’s free. 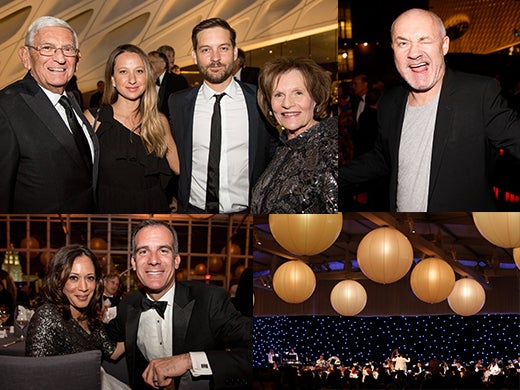 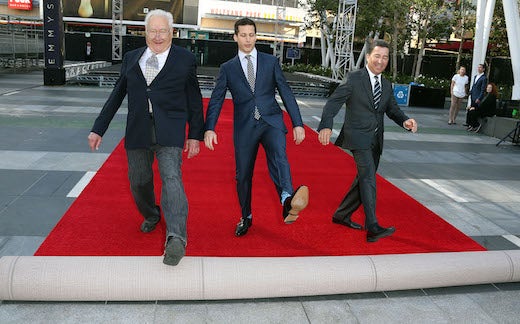 The morning after NBC’s Neil Patrick Harris/David Hurwitz/ITV premiere of “Best Time Ever”, I ask Academy CEO Bruce Rosenblum where the hyper cross-format live show would land for Emmy consideration next year. After a brief consult with Academy President Maury McIntyre, they decree probably “Variety Sketch”. That puts NPH against the likes of several Comedy Central shows: “Inside Amy Schumer,” “Key and Peele,” “Drunk History,” and Broadway Video’s “SNL” and “Portlandia.” 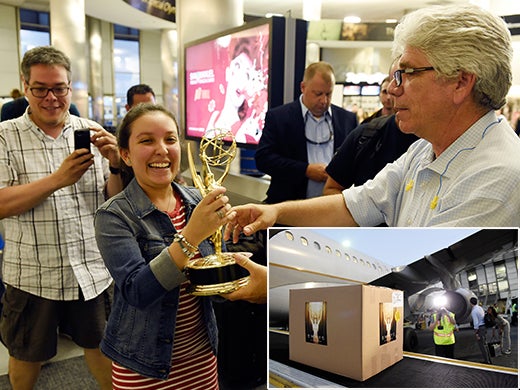 100 Emmy Statuettes arrive in Los Angeles from the factory in Chicago on United Airlines flight 655. Their next stop? Some happy hands.