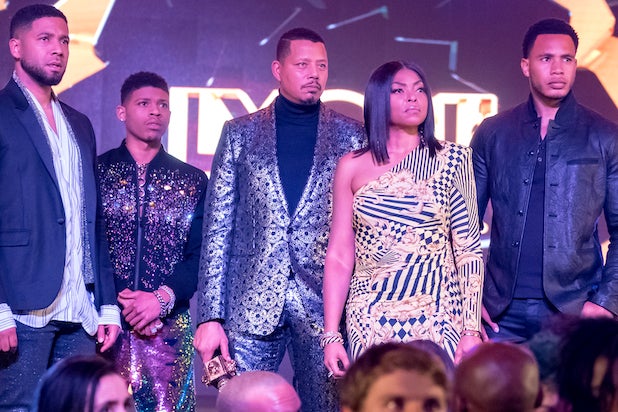 Do. Not. Tell. Us. Andre. Is. In. That. Casket. ‘Cause that’s definitely what Wednesday’s episode of “Empire” — the Fox drama’s Season 5 fall finale — implied.

In the closing moments of the episode, titled “Had It From My Father,” a flash-forward showed us Andre (Trai Byers) being rushed into the ER, with Cookie (Taraji P. Henson) and Lucious (Terrence Howard) looking on in horror as their eldest son flatlined.

That cliffhanger has us strongly assuming Andre is the person inside the coffin that Lucious has been mourning over in all those cuts to the future we’ve been seeing since the season premiere.

“You could assume it, I can’t guarantee that that assumption will be accurate,” “Empire” showrunner Brett Mahoney told TheWrap in an interview ahead of tonight’s episode.

Alright, but it is definitely, definitely a very real possibility here — right, Brett?

Um, can you expand on that a bit more? ‘Cause we’re a little worried over here now.

“I will say that Andre will be grappling with life and death circumstances in the second half of the season and Cookie and Lucious — I’m being very careful (laughs) — when Cookie and Lucious are drawn to and discover what he’s dealing with, all hell breaks loose.”

Thank God. Now will we be devastated when we find out who it is?

“That’s a good question,” Mahoney says. “I don’t know. What I’m hoping is that people will be satisfied in terms of the storytelling and understand how we got there.”

Alright, now that we’re thoroughly freaked about Andre’s wellbeing, let’s talk about the shocking news (to everyone in-universe) that Jeff Kingsley (A.Z. Kelsey) is Lucious’ son — a revelation that came right in the middle of Lyon Family Management’s big night as the episode wrapped up.

“This bombshell was dropped in this very public forum, right after Cookie said, ‘I’m all in and I’ve sold the condo and we’re going to do this together. So no more secrets.’ And then she’s blindsided with this,” Mahoney says. “So how will she react? And then the boys, how will they react in terms of a) what it means for them to have an additional brother and then also, what it means for how this impacts their mother? But I think the thing we haven’t heard as we’ve told the story in the first half, we haven’t heard Lucious’ side of it. And I think that’s another key to how everyone will react and respond.”

So how is Lucious taking the news that he’s got another son by a woman from his drug-dealing past who he had basically forgotten about — and that this son is the man who has been messing with his empire?

“He saw Kingsley as this adversary that was trying to take him down and we know how Lucious deals with adversaries,” Mahoney says. “So that scene with him going and literally beating Kingsley nearly to death, but then the response that this man is his son really blows Lucious away. And it makes him see Kingsley in a whole different light.”

While all this drama is going on, Mahoney says Cookie and Lucious will still “definitely” have to consider taking Empire back after Giselle’s offer. But that’s obviously going to be thrown into chaos because of Kingsley’s familial status.

“Cookie wondered, isn’t it possible that they could have it all? They could have Lyon Family Management and they could have Empire too,” Mahoney says. “But this is, of course, complicated by the Kingsley of it all, and what that means for their family and therefore their business.”

“Empire” Season 5 will return at midseason on Fox.