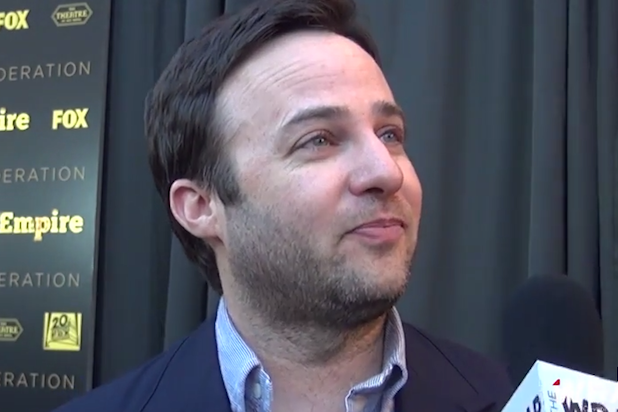 Fox’s “Empire” has enjoyed one long winning ratings streak all season. And just as it’s nearing Wednesday’s two-hour finale, its co-creator has gotten use to his new normal.

“Every week, I’m not anxious about whether we’ve gone up again,” co-creator and executive producer Danny Strong told TheWrap during a phone conversation on Tuesday.

“It’s not like I’m tense about it or concerned or anything, but simultaneously every week we go up with some number,” he continued. So, it’s been kind of this wild run.”

But, while the show’s success isn’t a question for the creator, one of its stars has started a bit of a controversy.

Terrence Howard, who plays patriarch Lucious Lyon, has strong opinions about the use of the N-word on TV.

Though the actor differs from costar Taraji P. Henson, who said on Monday that she’s against the use of the word, Howard thinks it’s time to get real. The Oscar nominee wants to drop the stigma surrounding the word, which he believes would make the Lee Daniels hip-hop drama feel more authentic.

But Strong sides with Henson on the issue, saying it isn’t necessary and that he has felt that way for a long time.

“I know when Lee [Daniels] and I were writing the pilot, he was particularly concerned about not using [the N-word], because it’s just so authentic to hip-hop and African-American culture and it’s a word that’s used a lot,” Strong recalled.

“We were told we could not use it,” he added. “And I said to him that I really don’t think the audience is going to miss it. And I don’t think they miss it one iota and we don’t need to use it.”

Strong also feels that using the controversial word on “Empire” doesn’t quite gel with their vision for the show.

“I particularly thought there was something really cool about doing it on a network, because we would be constricted,” Strong said. “When Lee and I discussed doing ‘Dynasty’ and ‘Dallas,’ then it should be on a network. Let’s do that version of it. And because we’re on a network, the audience knows they’re not going to hear certain words because they know they’re not watching cable. That’s why I think the audience doesn’t even think about it.”

While Strong had much to say about that controversy, he was much more tightlipped about what fans can expect from Season 1’s two-hour finale, which will feature musical guest stars Snoop Dog, Jennifer Hudson, Rita Ora, Juicy J and Patti LaBelle.

“There’s a ton of music throughout,” Strong said. “There’s also a big concert. You get a ton of songs in that big concert at the end.”

He was similarly mum on what fans can expect from Season 2. At the very least, he said that we won’t have to wait a year for the show to come back.

When TheWrap asked if the show will return this fall, Strong replied, “Yeah, possibly.”

Additionally, TheWrap caught up with Strong on the red carpet for last week’s Emmy screening of the show, and he revealed the character for whom he has “special affection.” Hint: It’s not Cookie.