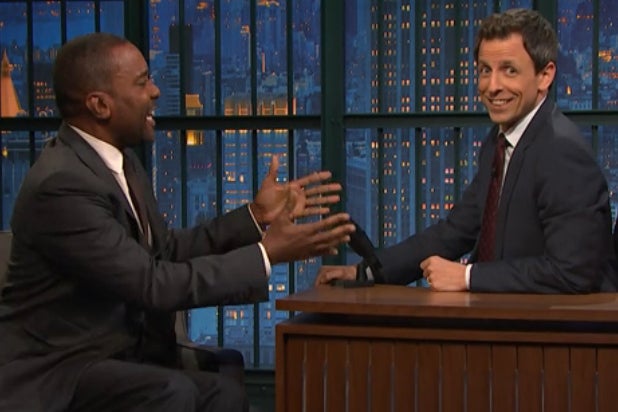 Creator Lee Daniels joined Seth Meyers on NBC’s “Late Night” on Monday, and had a confession to get off his chest: “My boyfriend was so nervous about me coming here today,”Daniels said. “Because I had a crush on you.”

“Be nervous, stay nervous,” Meyers played along into the camera.

“And then I found out you’ve got a wife and everything,” Daniels continued. “And I said, ‘Shut up, he’s another one [that] bites the dust.'”

When Meyers asked the “Empire” executive producer why the ratings juggernaut is working so well, Daniels responded: “You know, it’s just about telling the truth.”

One other truth is how tricky it can be to navigate the FCC regulations that come along with a broadcast show. “I’m bound and gagged — and handcuffed,” Daniels admitted of working on network TV instead of cable.

That said, Daniel’s is happy where he is. This way, everyone can see it without a subscription, and he’s even found relief being creatively tied to the rules of the airwaves, where the actors use glances and nuance instead of swear words, Daniels explained.

He and Meyers then outlined their dream guest role for President Obama, should he ever be down for an out-of-character cameo. The appearance sounds like it would be awesome, should they be able to actually pull it off. Just don’t bet on it.