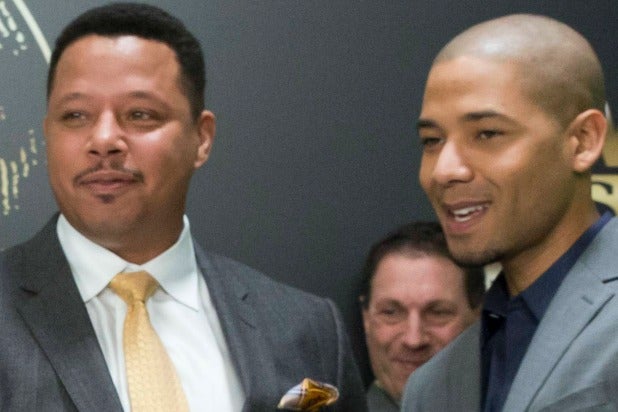 UPDATE, 10:08 a.m.: In the final ratings numbers, the two-hour “Empire” finale ticked up to a 6.5 rating, versus the 6.4 that preliminary numbers indicated. Wednesday’s season finale also inched up in total viewers, with 16.7 million compared to the 16.5 million from preliminary data.

“Empire” launched big, it became huge, and it closed colossally: The Fox hip-hop drama drew an average of 16.5 million viewers with its two-hour Season 1 finale on Wednesday. It also scored a bigtime 6.4 rating/20 share in the advertiser-sought 18-49 demographic.

Fox plans to release adjusted final numbers shortly. The network finished first with the aforementioned numbers, as the “Empire” finale was the only show on its primetime schedule, rising 21 percent in the key demo and 19 percent in total viewers in its first hour, the one Nielsen compares. As a result, Fox achieved the highest rated night on any network with regular entertainment programming in nearly three years, since its May 2012 “American Idol” season finale.

Additionally, with the massive marks, “Empire” surpassed CBS’s “The Big Bang Theory” to become broadcast TV’s highest-rated show, based on originals. The Lee Daniels‘ series rose 79 percent in the demo from premiere to finale, the most in eight years. The “Empire” season ender is TV’s highest rated freshman finale in nearly 10 years, since “Grey’s Anatomy” in 2005.

Of course, the other networks aired their own shows Wednesday night — even if it didn’t seem like it.

ABC was third in ratings with a 1.3/4 and in viewers with 5.7 million. Following reruns, special “The Untold Story of The Sound of Music” had a 1.4/5 and 7.3 million viewers.

Univision was fourth in ratings with a 1.0/3 and fifth in viewers with 2.9 million.

Telemundo was seventh in ratings with a 0.5/2 and in viewers with 1.3 million.