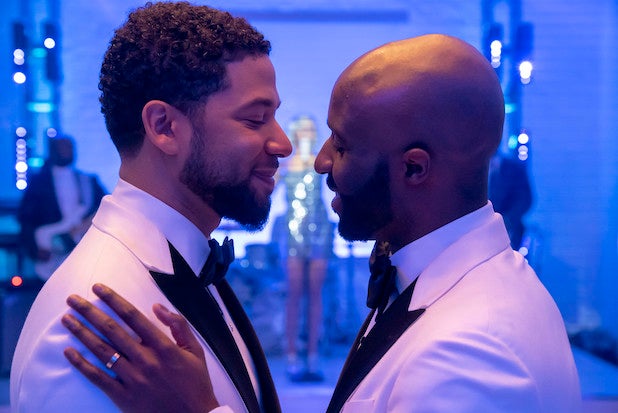 There are still two more episodes left in the fifth season of “Empire,” but Wednesday’s hour was the final one in which Jussie Smollett will appear — at least for the show’s current run.

This episode of the Fox hip-hop drama, titled “Never Doubt I Love,” centered around the wedding of Jamal (Smollett) and Kai (Toby Onwumere), who have mended their fractured relationship after a rough engagement this season and finally decided to tie the knot.

The couple’s high-profile nuptials are going to be featured in the New York Times, which we find out will include mention of Kai’s HIV-positive status, after the interviewer was tipped off via an anonymous email that said the Jamal was trying to call off the wedding due to this news. However, Jamal and Kai say this isn’t true. The two spend the better part of the episode worrying about what will happen if their private business gets out — and taking a break to enjoy their bachelor party.

When it comes time for the ceremony, which is officiated by Becky (Gabourey Sidibe), Kai and Jamal pour their hearts out to each other — though Smollett’s character scares everyone at first when he begins his vows with, “I’m sorry, I can’t do this.” Relax, he just meant he can’t pretend in his sentiments that they will have a “fairy tale” marriage and he wants to promise to be “30 percent messy,” and make their relationship something that “endures.”

They “jump the broom” and enjoy a lovely reception with their friends and family and even let the NY Times reporter know they are fine with her printing Kai’s HIV status, because he knows he is loved and is going to be OK.

In the end, more of the drama comes from the other Lyons, as Cookie (Taraji P. Henson) tries to keep Damon Cross (Wood Harris) from telling Lucious (Terrence Howard) about their history together, and Andre tries to make Jamal and Hakeem (Bryshere Y. Gray) accept Kingsley (A.Z. Kelsey) as their brother.

Then it all comes to a head in the episode’s closing moments, when Andre reveals his dark secret to his father: his cancer is under control, but the chemotherapy medication he took to combat the lymphoma destroyed his heart muscle and he has only a few weeks, maybe months, left to live.

But Andre tells his dad he doesn’t want to go out this way, and this “Empire” ends with Lucious’ (formerly) eldest son telling him he wants to commit suicide and die on his own terms.

Smollett was written out of the last two episodes of Season 5 after he was accused by Chicago police of orchestrating a staged assault against himself earlier this year. He was initially charged with 16 felony counts related to filing a false police report, but the charges were later dropped. His fate with the series, which has yet to be renewed for a sixth season at Fox, is still unclear.

Before the actor’s final episode of the season aired Wednesday, a letter was sent to Fox and the show’s producers by series regulars, including Henson and Howard, calling for Smollett to be brought back to the show next season. Other names signed to the letter include Gray, Byers, Sidibe and Nicole Ari Parker.