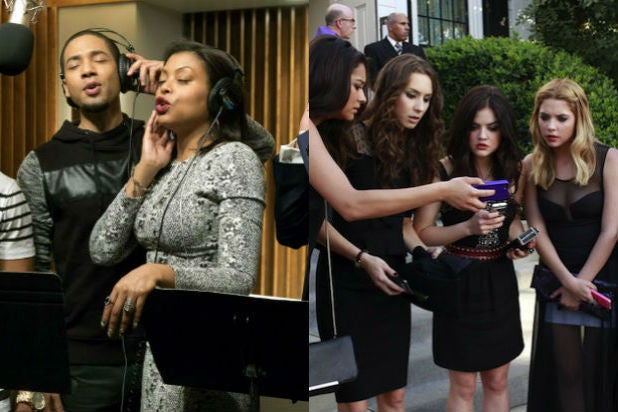 Fox and ABC Family earned a grade of “Excellent” in the 2015 GLAAD Network Responsibility Index (NRI), according to the annual report released Thursday.

The report credits shows like “Empire,” featuring Jussie Smollett’s openly gay breakout character Jamal Lyon, with lifting Fox’s percentage in not only LGBT visibility, but also diversity. Thanks to the hit show, 36 percent of the network’s LGBT impressions as identified by GLAAD came from people of color.

ABC Family, meanwhile, posted the highest-ever percentage of LGBT-inclusive programming for any network in the history of the report with 74 percent, up from 42 percent in 2014. Of all the LGBT-impressions made on the network, 79 percent of those were lesbian characters, 49 percent were people of color, and the network also featured a transgender character played by a transgender actor.

However, the report notes that the reveal of “A” on “Pretty Little Liars” as transgender would have negatively affected the network’s score, but the episode fell outside the report’s research period. GLAAD took issue with the fact that the transgender character tried to kill her family and the main cast.

“The show made some attempt to separate her transgender identity from her mental illness, but ultimately she was the latest in a long series of transgender women portrayed as psychotic killers in mainstream media,” the report states.

The report also singles out showrunner Shonda Rhimes for her contributions to diversity on television. “Collectively, there is probably no single person who oversaw more LGBT-inclusive hours of television than creator Shonda Rhimes, who had three hit, hour-long dramas on ABC this season,” it reads.

A&E earned a failing grade yet again, but did experience a slight uptick from last year, going from 6 percent to 8 percent of LGBT-inclusive programming. The report notes that “The Returned” was the only A&E show to consistently feature LBGT characters, but it was cancelled after one season.

Other than that, the only shows that featured positive representations of the LGBT community on the network were reality shows “Wahlburgers” and “Donnie Loves Jennie,” which both featured appearances by New Kids on The Block member Jonathan Knight.

History came in dead last with zero percent of its original programming featuring any LGBT-impressions. The report notes that last year there was at least a discussion on “Bible Secrets Revealed” in which experts discussed how prejudices against the LGBT community were derived from certain Biblical passages, but there was no such programming this year.

The report concedes that not all of History’s programming would easily lend itself to including more LBGT diversity, but GLAAD urges the network to include LGBT characters in series like “Vikings” or “Texas Rising.”

The NRI looks back on the previous year in programming and rates networks on LGBT-inclusive content that aired between June 2014 and May 2015. The grades of “Excellent,” “Good,” “Adequate,” or “Failing” are awarded based on the quality and relative quantity of LGBT representations in each network’s original programming.

GLAAD also announced that this is the final edition of its NRI, and the organization will now turn its focus to increasing the diversity of LGBT images on TV through its annual Where We Are On TV Report.