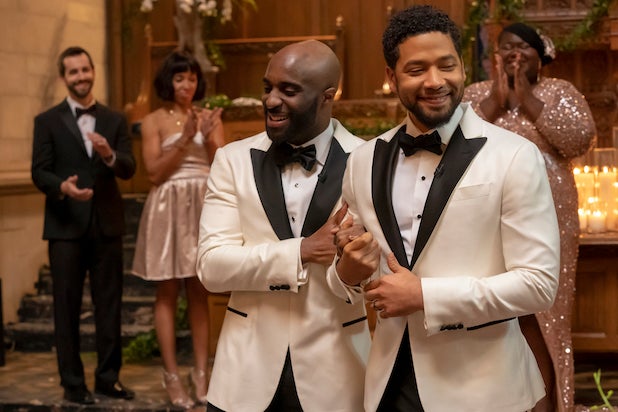 “Empire” has been renewed by Fox for a sixth season, one week ahead of its Season 5 finale, though star Jussie Smollett’s fate on the series as the character Jamal Lyon is still uncertain.

“By mutual agreement, the studio has negotiated an extension to Jussie Smollett’s option for season six, but at this time there are no plans for the character of Jamal to return to ‘Empire,” Fox Entertainment and 20th Century Fox TV said in a joint statement Tuesday.

After news of the renewal broke, TheWrap obtained this statement from a representative for Smollett: “We’ve been told that Jussie will not be on ‘Empire’ in the beginning of the season but he appreciates they have extended his contract to keep Jamal’s future open. Most importantly he is grateful to Fox and ‘Empire’ leadership, cast, crew and fans for their unwavering support.”

Smollett was written out of the last two episodes of Season 5 after he was accused by Chicago police of orchestrating a staged assault against himself earlier this year. He was initially charged with 16 felony counts related to filing a false police report, but the charges were later dropped.

Last week, the Taraji P. Henson and Terrence Howard-led hip-hop drama aired Smollett’s final episode of the season, which featured the wedding of the openly gay Jamal and his fiance Kai (Toby Onwumere). The hour tied the show’s series low rating among adults in the sought-after 18-49 demographic.

Before the episode aired, a letter was sent to Fox and the show’s producers by series regulars, including Henson and Howard, calling for Smollett to be brought back to the show next season. Other names signed to the letter include Bryshere Y. Gray, Trai Byers, Gabourey Sidibe and Nicole Ari Parker.

The final two episodes of Season 5 are scheduled for tomorrow and May 8, respectively.

“‘Empire’ continues to break barriers with its emotionally powerful storytelling, and it remains a core part of the FOX legacy,” Michael Thorn, president of entertainment for FOX Entertainment, said in a statement Tuesday. “We want to thank everyone on the show – Taraji, Terrence and the entire cast, as well as Lee, Danny, Brett, Sanaa, Brian, Francie, Dennis and their teams – all of whom have done a tremendous job this season. We know there are so many more stories to tell, and we can’t wait to see what they have in store for Season Six.”

Here’s the description for tomorrow’s episode:

Cookie (Taraji P. Henson) gets picked up by AUSA Conway (guest star Alicia Coppola), while Lucious (Terrence Howard) is visited by his past. Becky (Gabourey Sidibe), Hakeem (Bryshere “Yazz” Gray) and Andre (Trai Byers) devise a plan to save Empire by putting on a show with special guests Sevyn Streeter and Ty Dolla $ign. Meanwhile, Andre helps Empire with an assist from the last person the Lyons expect and Cookie may never forgive Lucious for what he’s done, leading up to next week’s heart-stopping finale.