“Empire” concluded the first half of its fall run on Wednesday, predictably and easily topping its time slot per Nielsen numbers — but how has Season 2 really stacked up to phenomenon that began in Season 1? It all depends on how you look at it.

While admittedly not a perfect apples-to-apples ratings comparison, it’s informative to compare the 10 aired Season 2 episodes to the first 10 from Season 1, to see if “Empire” is technically experiencing a sophomore slump yet in terms of an average, as its still-excellent ratings have trended in the opposite direction of the first run.

Later, we’ll get into that whole “But is it as good?” thing.

“Empire” averaged a 4.81 rating and 12.23 million total viewers in Season 1 through its first 10 episodes, according to Nielsen’s live-plus-same day ratings. Adding in last season’s two-part finale — which brought the freshman run up to 12 total hours — takes that up to a gaudy 5.05 demo number, with 12.98 million total viewers. Not too shabby for a new series, but admittedly not entirely fair to Season 2.

The current run has averaged a 4.76 demo rating and 12.24 million total viewers through its first 10 episodes. That’s down just 1 percent in the demo and even up fractionally among total eyeballs. Removing a Thanksgiving episode, which was coded as a special to help offset lower TV tune-in (and is marked with an asterisk in the chart below), that rises up to a 4.93 rating and 12.58 million viewers — both better than the series’ initial 10 episodes. In the continuation of our desire to be fair here, Season 1 did not have the anticipation of a big return nor a midseason finale to keep numbers up.

The optical difference, of course, is that Season 1 started quite well, and consistently grew to reach incredible heights. Season 2 opened huge, and has slid down closer to the “very good-to-great” range.

Total viewers per episode from both Season 1 and Season 2 are plotted in the below graph for ease of digestion. The first run is in red; the current season is represented in gray. 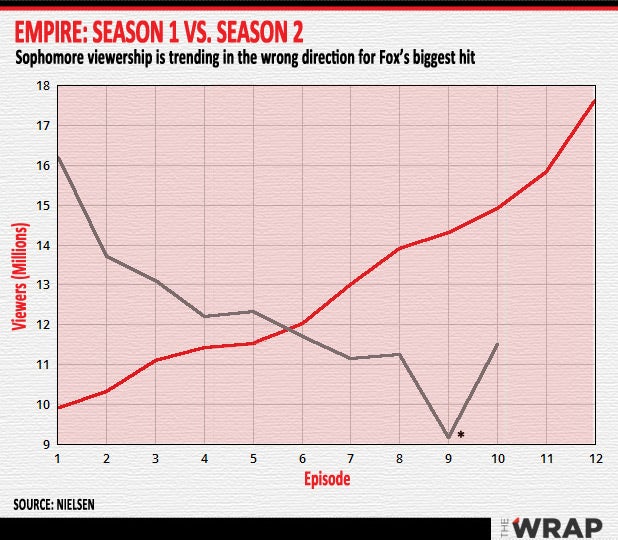 Of course, ratings are only one way to judge a show, and live-plus-same day numbers are becoming increasingly imperfect with each passing season. Critically — and perhaps, surprisingly — the show is actually rating better this time around. At least, per actual critics, that is. General viewers seem to prefer the first run.

RottenTomatoes.com critics rate Season 1 of “Empire” fresh at 80 percent. Counting just the website’s Top Critics, you can add an extra percentage point. Season 2 is way up at 95 percent, per both All and Top Critics. That said, 83 percent of audience liked the first 12 episodes, while 79 percent of them liked Season 2’s current 10-episode run.

Also Read: Will 'The Wiz Live' Ratings Be More 'Sound of Music' or 'Peter Pan'?

So, is an “Empire” sophomore slump actually happening? It’s probably too early for the label, though especially this time of year, we love putting things in a box and wrapping them up with a pretty bow.

The trajectory of Season 2’s Nielsen numbers doesn’t look particularly great for Fox, however, but the network would gladly take anything with a “2” or better in front of it these days. Fox is currently averaging a 1.7 rating across primetime thus far this season in live + same day numbers. Those numbers are good enough — or bad enough, really — for last place among the Big 4 broadcast networks. Perhaps that’s part of the reason why execs recently closed the book on supporting that Nielsen metric.

“Empire” returns for its back-8 episodes on March 30.