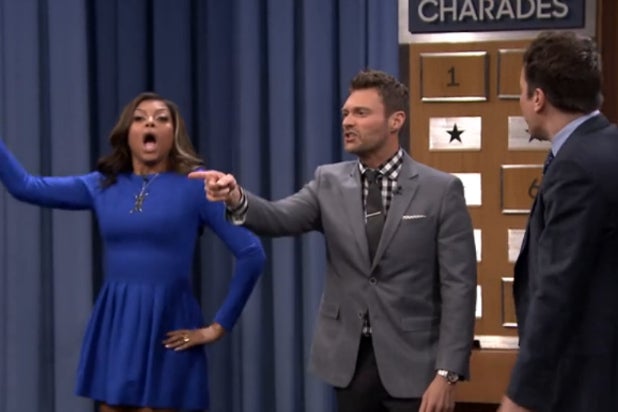 Taraji P. Henson plays a pretty good Cookie on Fox’s newest smash hit “Empire,” but she does an even better “Elephant Man,” apparently.

The actress joined Jimmy Fallon and Ryan Seacrest for a competitive game of charades on Friday’s “Tonight Show,” where she pretty much single-handedly won the thing for her and teammate Tariq of house band The Roots. By TheWrap‘s count, however, there’s a bit of an asterisk next to that “win.”

Henson was playing for something bigger than pride: The actress thought the prize was $120,000 dollars, and/or taking over as host of the NBC late-night staple.

Ladies up first, Henson acted out Abba’s “Dancing Queen,” with Tariq (more-or-less) guessing it pretty swiftly. Seacrest and Fallon matched their speed with Van Halen’s “Runnin’ With the Devil.”

From there, the scoring got a little messed up, since Henson and Tariq went two-for-three, while Seacrest and Fallon went two-for-two. Somehow, given those stats, it still ended in a showdown, which the soap opera star and musician got first, acting out and guessing “The Elephant Man,” respectively. Replay may be in order on this one, folks.

“Just so you know, Taraji P. Henson will be taking over the Jimmy Fallon show,” the actress concluded to his New York City audience.