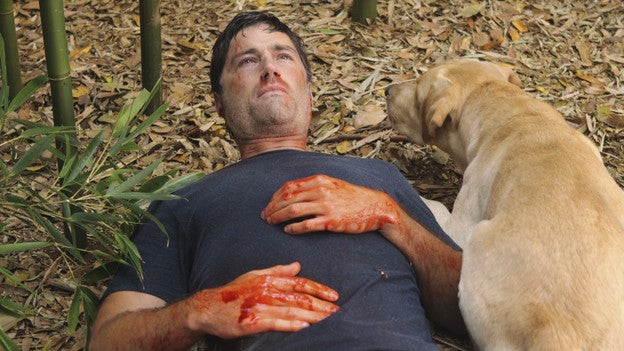 The 22-hour finale of “Lost” concluded late Sunday on ABC. Below, some reactions from major critics, fan sites and selected “Lost” fans from around the Web. (Spoiler: most liked the relative ambiguity of the ending; others, not so much.)

Well, it was better than the “Life on Mars” finale.

But you have to think that the gauzy, vaguely religious, more than a little mawkish ending of ‘Lost’ – “Touched by a Desmond” — will not sit well with a lot of the show’s fans. Many of them will have thought that things were going pretty well for the first two and a quarter hours of the final episode, as the producers treated them to a series of montaged moments in the sideways reality world, in which the main characters regained their memories of the island. But then came the ending, in which most of the main cast members gathered at a church for the big reveal: they were all dead. […]

The finale will be compared, in its effect if not its form, to that of the “Sopranos.” The “Sopranos” finale was ambiguous and a bit of a shrug, but not puzzling; to me the “Lost” finale, in the immediate aftermath, felt forced and, well, a bit of a cop-out.

The great puzzle of the last season of Lost has been: how can both the flash-sideways universe and the Island universe mean anything? If Sideways is the universe in which Oceanic 815 never crashed, who cares what happens on the Island? If the Island is where the characters’ fates are sealed, how can there be any meaning to what happens in the Sideways?

The moving, soulful finale that Damon Lindelof and Carleton Cuse gave us met that challenge. The Island world, we learned, absolutely mattered to the physical fate of the survivors. (And sci-fi purists ticked over the spiritual ending should at least give it up for this: what happened, did, indeed happen.) And the Sideways world mattered because it was the culmination of the spiritual, moral, human lives–the souls–of the characters.

It mattered, it moved, and it achieved.

If, as some said, "Lost" was to be judged by its finale then all I can say is Damon and Carlton pulled it off. I’ve been crying and laughing and basically an emotional basket case for the last 2.5 hours. I could not possibly have asked for anything more. I am in awe.

Answers or not, as two-and-a-half hours of television, the final "Lost" was extraordinary, and I think it accomplished what it set out to do: It was a very memorable ending, and people will be talking about it for years to come. One thing I never expected was how emotional I would feel watching this finale, and reflecting on it.

“The End” was an emotionally draining epic that had me crying with almost every single “awakening” and has left me mulling the true significance of the Sideways world, which was revealed to be a Purgatory-like realm created by the souls of the dead castaways themselves.

So much of the finale of "Lost" is about bringing things to a sort of holistic closure, about tying things together. Much of the series has been about duality, about things that are split between two halves or two forces that act in opposition, but the finale is largely about solving dualities. I mean, on one (really obvious and kinda Freudian) level, it’s about putting a big rock back in a magic hole. But it’s also about the character who’s probably been responsible for the most good in the world of "Lost" and a character who has been responsible for a lot of bad looking to find another way to do business than the way that the Monster and Jacob did it. There doesn’t need to be judgment followed by execution. There doesn’t need to be a moratorium on people leaving the Island. And there doesn’t need to be the constant struggle between light and dark. Rose and Bernard had it right after all. The best way forward is to opt out, is to just do the right thing by those you love. In this way, Jacob was "right" or at least on the side of what the series thinks is "good." He was more about sacrifice than selfishness, and the finale’s latter passages are about what it means to embrace that ethos, about what it means that Desmond probably could put the stone back in the hole, but Jack is the one to do it because Desmond still has someone back home to live for.

"The End" chose not to tie up loose ends or make the mythology entirely make sense. It decided not to make more specific just why the Monster couldn’t leave the Island or why the Island had to exist for the rest of the world to go on as it is (at least, that’s how I’m interpreting the idea that the Island’s heart going out would mean the end of everything). It probably figured that vague notions in these regards were all we needed.

Once upon a time, there was a television show about a bunch of people on an island. For six years it was one of the most fascinating things on TV. And then it ended, in the worst way possible.

“Lost” ended tonight, and with it the hopes and dreams of millions of people who thought it might finally get good again. SPOILER ALERT: It didn’t. What did we learn? Nothing.

Finales are hard. And I must admit that my expectations for the "Lost" finale weren’t high. Perhaps later in the week, I’ll go into the reasons that caused me to lower my expectations. Suffice it to say, I just wanted Sunday’s finale to be … not bad. I was hoping for a middling ending, to be honest.

Yet "The End," the show’s final episode, was so much more than middling. The first two hours were exciting and emotionally engaging, especially when the island castaways in the Sideways world began remembering their "real" lives. Those "flashes" were powerful and many cast members did some of their best work in those scenes. I got chills as I saw Juliet and Sawyer talk about that coffee date. Sun and Jin, Charlie, Kate and Claire — all their recollection moments were moving and powerful.

But the last half hour or so took the finale to another level.

I think the creators of the show did precisely what they should have done with its finale: They gave the series a conclusion, but did not make it conclusive. In the same way any great work (and I’m not ready to place Lost in this category) of literature, mythology, philosophy or faith, there is still room for interpretation existing that offers those who want fundamental, simplistic answers to have one: “they all died;” as can those who want ambiguity that can provide the foundation for a lifetime of debate: “where was that plane flying to”?

Just when you thought a finale wouldn’t polarize audiences more than The Sopranos did, along comes Lost!! For the record, I LOVED it. I loved it because I didn’t want everything answered, and not only did they not answer everything, they even left some REALLY big things unanswered. Upsetting? Now that I’ve thought about it, no. I talked earlier today about how the great thing about the fandom of Lost was that it attracted demographics from so many diverse communities. But as a result, when you’re looking to create Big Answers in your themes, you have to leave things open to interpretation, so that someone with a Christian background might interpret a faith-based show one way, while a Muslim would look at it a different way, and an atheist an even different way. And with faith being such a huge component of the show and that finale, they left it open for interpretation for all of us.