Peloton, known for its popular exercise bikes and subscription workout classes, is the latest company to feel the pain. The company’s shares dropped nearly 6% during early-morning trading on Friday. That follows an ugly Wall Street debut for the company on Thursday, when its shares fell 11%. Peloton shares were trading at about $24.20 on Friday morning.

The company’s initial struggles follow WeWork’s botched IPO — and the resignation of CEO Adam Neumann — and Smile Direct Club plummeting 28% after its debut earlier this month. Adding to the IPO fears, Uber shares have dropped almost 25% since its IPO in May, while Lyft, its ride-sharing rival, has cratered nearly 50% since its own IPO in March. 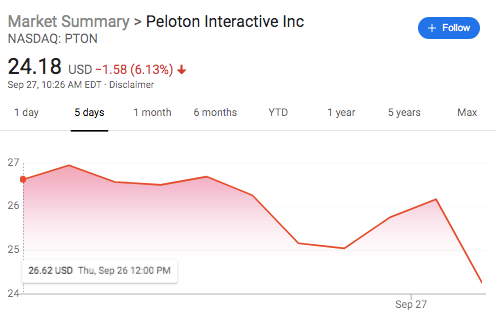 But could these seemingly unrelated companies have influenced Endeavor’s last-minute decision to indefinitely postpone its Friday IPO? “Absolutely,” according to Matt Bilinsky, a media-focused attorney with Weinberg Gonser LLP.

“We all want to think every IPO operates by principals unique to the business. No, the public securities market reacts more strongly to the general attitude of the public market,” Bilinsky said. “You’d like to think each offering exists in a silo. No, part of determining whether you go public is what the attitudes of Wall Street, the retail investors and the public market are.”

In a single word, Bilinsky said it’s about “receptivity.” The market has turned cold for recent mega-IPOs, and that likely played a key role in Endeavor’s decision.

Of course, there were other factors as well.

The company that super-agents Emanuel and Whitesell built had positioned itself as one of the most powerful talent agent and entertainment companies in Hollywood. It scooped up glitzy assets as it diversified away from simply being a talent agency and overtook longtime rival CAA in size and scope. But according to insiders, the company’s crushing debt, a Hollywood labor dispute, investor confusion over Endeavor’s business model and anxiety over IPOs, in general, proved to be overwhelming, making an IPO the one deal the company’s agents couldn’t close.

Add those up, and it becomes more clear why Endeavor’s stock isn’t trading on Friday morning.