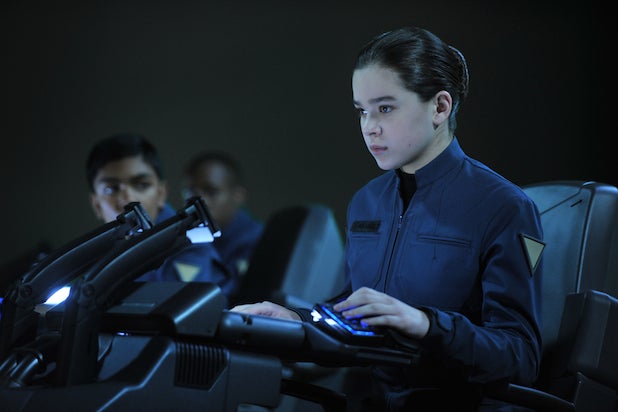 “Ender’s Game”opened to $1.4 million during Thursday late shows, according to studio estimates.

That’s a solid start for the effect-heavy production considering that it was debuting on Halloween, when most moviegoers are more concerned with trick-or-treating than with intergalactic warfare.

The adaptation of Orson Scott Card’s science-fiction novel has battled controversy over the author’s anti-gay views, but is the favorite to win the box office this weekend. Analysts project that it will score $25 million,which should outpace the other two films debuting in wide release this weekend: the animated turkey adventure “Free Birds” and the “we’re a couple of years away from Depends” bachelor-party comedy “Last Vegas.”

Produced by Summit Entertainment, Odd Lot Entertainment and Digital Domain, the visual-effects company behind its scenes of space combat, the hope was that the film would launch a new franchise. However, with a $100 million production budget, an opening of under $30 million could prove problematic.

Reviews for the film have been positive, with “Ender’s Game” scoring a respectable 62 percent “fresh” rating on critics aggregator Rotten Tomatoes. That’s important, because box-office analysts say the film will depend on strong word-of-mouth in order to compete against films like “Thor: The Dark World” and “The Hunger Games: Catching Fire,” both of which debut over the next few weeks.

“If it’s a quality film, it could sustain itself through the holidays,” Jeff Bock, a box-office analyst with Exhibitor Relations, said. “There’s usually room for a good family picture, but there’s a lot of movies coming into the marketplace and there’s not a lot of space to breathe.”

Harrison Ford and Asa Butterfield star in the film, which is directed by Gavin Hood (“X-Men Origins: Wolverine”).

Also read: ‘Ender’s Game’ Reviews: Did the Critics Find That the Space Adventure Soars or Crashes to Earth?“

Free Birds,” which features the voices of Owen Wilson and Woody Harrelson, should finish in second place with roughly $18 million, analysts say. While third place will be a deathmatch against last week’s first place film, “Jackass Presents: Bad Grandpa,” and CBS Films’ “Last Vegas.” The latter production stars a cavalcade of aging Oscar winners — Michael Douglas, Robert De Niro, Morgan Freeman and Kevin Kline – and should debut to around $14 million.