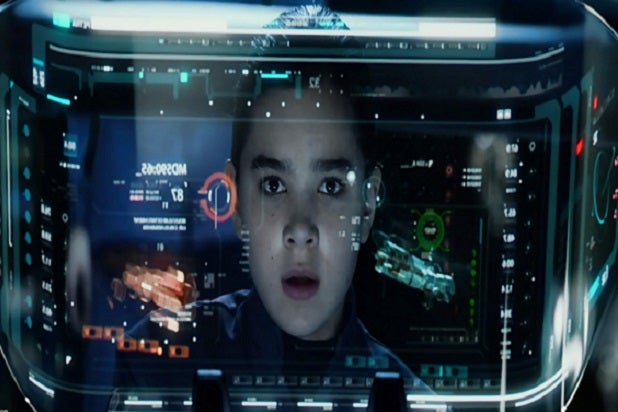 “Ender’s Game” is the clear-cut favorite to win the box office this weekend with around $25 million, topping two other wide openers, the animated turkey tale “Free Birds” and the geriatric bachelor party comedy “Last Vegas.”

The turkey tale “Free Birds,” which features the voices of Owen Wilson and Woody Harrelson, is a good bet to finish second with about $18 million, analysts say. Third place is looking like a battle between a bunch of old guys: Both last week’s No. 1 film, “Jackass Presents: Bad Grandpa,” and CBS Films’ “Last Vegas” – starring Michael Douglas, Robert De Niro, Morgan Freeman and Kevin Kline – are projected to land around $14 million their opening weekend.

“Ender’s Game” has the ingredients to be a young adult franchise: It has a huge built-in base from Card’s book – which has climbed back atop the best-seller list – and a plot featuring a young genius trained to be the fiercest warrior on an Earth threatened by aliens.

The huge success of the “Twilight” movies, which took in $3.3 billion globally for Summit, and the nearly $700 million haul of last year’s “The Hunger Games” — have fueled Hollywood’s drive to find next the Bella or Katniss and launch a franchise. But capturing the attention of teenagers isn’t easy, and Warner Bros.’ “Beautiful Creatures,” Open Road’s “The Host” and Sony’s “Mortal Instruments: City of Bones” have all tried and failed this year.

Card’s negative comments about President Obama and gay marriage won’t help “Ender’s Game.” A group called Geeks Out has called for a boycott and more than 11,000 people have signed a “Skip Ender’s Game” petition on the site.

Summit’s parent Lionsgate, Ford and Hood have all distanced themselves from Card’s comments, but that’s not the best red-carpet fodder for promoting a movie.

It has solid tracking and reviews (69 percent positive on Rotten Tomatoes), and late Wednesday was leading sales for new releases at online ticket broker Fandango, ahead of Tom Cruise’s “Oblivion,” Matt Damon’s “Elysium” and Guillermo Del Toro’s “Pacific Rim” at the same point in their sales cycles.

“Ender’s Game” isn’t strong on social media, however. Its Twitter mentions and Facebook “likes” trail those of Disney’s 2012 sci-fi flop “John Carter,” according to BoxOffice.com.

Summit has it in roughly 3,407 theaters and it will take over most of the Imax screens that “Gravity” has been on, but the PG-13-rated “Ender’s Game” isn’t in 3D and won’t get that box-office bump.

“Free Birds” is the first full-length animated feature for Relativity and Reel FX, who co-produced and financed the holiday project for a relatively modest $55 million.

The first week in November has been a traditionally strong launch date for animated films and the 3D Thanksgiving yarn should benefit from being the freshest family offering.  Sony’s “Cloudy With a Chance of Meatballs 2” is still playing solidly but is heading into its fifth week, and Disney’s “Frozen” won’t open until Nov. 27. The Nov. 11 Veterans Day school holiday should help, too.

In “Free Birds,” two turkeys travel back in time to change the course of history — and get turkey off the holiday menu for good.

Director Jimmy Hayward’s last movie was the flop “Jonah Hex,” but the one before that was the animated “Dr. Seuss’s Horton Hears a Who,” which took in nearly $300 million globally for Fox in 2008.

Relativity has the PG-rated “Free Birds” in a market-high 3,700-plus theaters, many of which will provide 3D premiums.

The ensemble comedy “Last Vegas” is aimed directly at mature moviegoers, and CBS Films is counting on it playing solidly for several weeks.

It’s tracking along the lines of the 2012 comedy “Hope Springs,” which opened to $14 million and went on to take in $63 million domestically, $114 million globally. That would work for CBS, since “Last Vegas” cost $28 million to make.

The critics are lukewarm, and it has a 46 percent positive rating on Rotten Tomatoes.

Several Oscar hopefuls will also be factors this weekend

The 3D space saga “Gravity” and Tom Hanks’ piracy saga “Captain Phillips” have continued to hold well, and Fox Searchlight is expanding “12 Years a Slave,” which cracked the top ten last week, into 44 additional markets and has upped the theater count to a little more than 400.

On the specialty front, Universal is opening the Rachel McAdams-Tom Holland romantic comedy “About Time” in around 175 theaters, and Focus Features is rolling out the Matthew McConaughey-Jared Leto AIDS-themed drama “Dallas Buyers Club” in six New York and L.A. theaters.