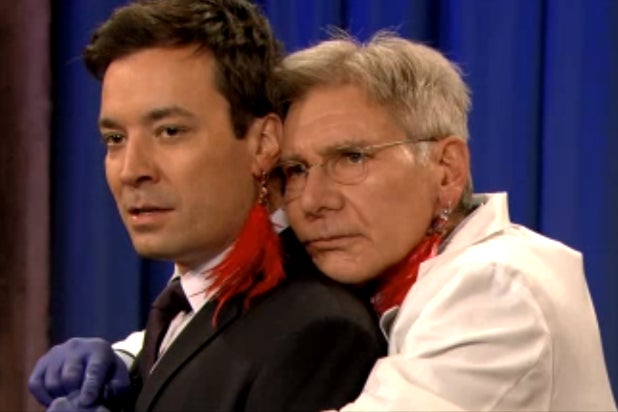 “Because he’s one of the coolest people in history and I want to be like him, I’ve asked Harrison Ford to pierce my ear,” Fallon explained to a giddy studio audience.

The future “Tonight Show” host was visibly shaken during the whole thing, worrying about what his wife would say and how much his first piercing would hurt.

The “Enders Game” actor then took a shot of tequila to calm the nerves — his at least. That didn’t quite help Fallon’s. Ford draped a blood sheet over the comedian, numbed the ear lobe, and marked the spot with a pen — while Fallon screamed the entire time. “What a puss,” Ford remarked.

The legitimate left ear piercing was caught on an extreme close-up camera to the rear of the stars. Fallon’s new hole was filled in with an incredibly ornate and bedazzled Mr. T-style earring.

In a show of solidarity, Ford put the matching ridiculous earring from the pair in his own ear.