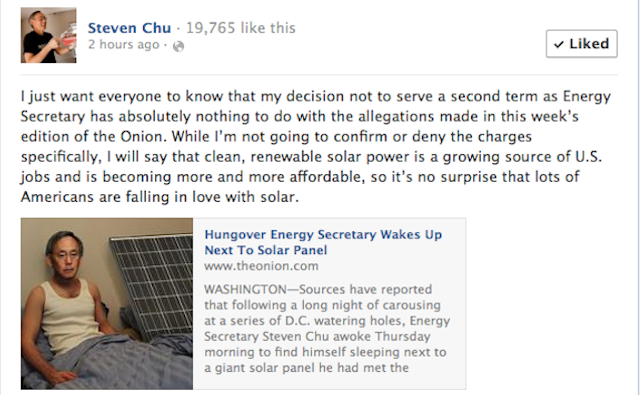 Energy Secretary Steven Chu didn't wake up hung over, laying next to a solar panel.

In a Facebook post, the outgoing member of President Obama's cabinet refused to confirm or deny a satirical Onion article thata featured the photoshopped image of a disheveled, tank-top-clad Chu sitting in bed beside a large, black solar panel.

The article, in typical Onion style, claimed Chu woke up hung over after a night of bar-hopping. It also said he had a history of extramarital affairs with alternative energy sources.

“This is bad. I really need to stop doing this. I’ve got to get this thing out of here before my wife gets home," the Onion "quoted" Chu as saying, before claiming the "regrettable dalliance" with the solar panel was his worst marital transgression since an "extended fling with a 90-foot wind turbine nearly ended his marriage."

Chu responded in kind on his Facebook page: "I just want everyone to know that my decision not to serve a second term as Energy Secretary has absolutely nothing to do with the allegations made in this week's edition of the Onion. While I'm not going to confirm or deny the charges specifically, I will say that clean, renewable solar power is a growing source of U.S. jobs."