Apparently, it’s not a good year to be a pop musician trying to win consideration from the Academy’s music branch. As usual, several prominent scores have opted out of or failed to qualify for the original-score Oscar, with this year’s non-contenders including Brian Eno, Karen O and T Bone Burnett.

Others whose music is ineligible include Carter Burwell, Erran Baron Cohen and moonlighting actor Jason Schwartzman.

Eno’s score for “The Lovely Bones,” a haunting and effective use of the composer’s music both new and old, was not submitted to the Academy for consideration.   Neither was Burnett’s and Stephen Bruton’s score to "Crazy Heart," which had been singled out by the Los Angeles Film Critics Association.

Yeah Yeah Yeah’s frontwoman Karen O, and Burwell, who co-wrote the music for “Where the Wild Things Are,” both submitted their work to the Academy but were disqualified by the music branch.

Notable scores have been disqualified in the past by the Academy’s music branch, which has strict rules for qualifying in the category. In 2007, for instance, Jonny Greenwood’s score to “There Will Be Blood” was eliminated from contention for containing too much pre-existing music, including compositions by Brahms and Arvo Pärt.

One section of the rules reads as follows:

“[S]cores diluted by the use of tracked themes or other preexisting music, diminished in impact by the predominant use of songs, or assembled from the music of more than one composer shall not be eligible.”

(The Academy does make an exception if “two composers function as equal collaborators in producing the score, each contributing a substantial amount of original music for the film.”) 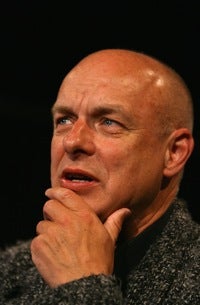 Eno’s music to “The Lovely Bones,” which incorporates several older compositions by the pioneering rock and ambient musician (right), is ineligible by the composer’s own choice. According to a spokesperson for the film, Eno simply felt that he didn’t have time to submit the required paperwork and submit to the type of publicity campaign necessary. (Eno photo by Sergio Dionisio/Getty Images)

The scores to both “Where the Wild Things Are” and “Crazy Heart” make substantial use of music from songs that were written for the films. (Two songs from each film are eligible in the best original song category.)

Fox Searchlight did not include the "Crazy Heart" score in its “for your consideration” listing on the film’s screeners, and opted not to submit the score in order to concentrate on the original song category. Paramount and Warner Bros., however, did suggest nominations in the original-score category on the "Lovely Bones" and “Wild Things” screeners, respectively.

In addition to “Wild Things” and “The Lovely Bones,” other ineligible scores that had been the subject of ads or FYC screener listings include “Harry Potter and the Half-Blood Prince” (Nicholas Hooper), “The Blind Side” (Carter Burwell again), “Precious” (Mario Grigorov), “Bruno” (Erran Baron Cohen) and “Funny People” (Michael Andrews and Jason Schwartzman).

Overall, only 81 film scores qualified, giving the category by far the smallest field among the 15 categories for which ballots went out last week. By comparison, 274 films qualified for best picture, best film editing, best cinematography and the two sound categories.

ADAM
ADORATION
ADVENTURES OF POWER
ALIENS IN THE ATTIC
AMELIA
ASTRO BOY
AVATAR
BAD LIEUTENANT: PORT OF CALL NEW ORLEANS
BRIGHT STAR
BROKEN EMBRACES
BROTHERS
BY THE PEOPLE: THE ELECTION OF BARACK OBAMA
CHERI
CLOUDY WITH A CHANCE OF MEATBALLS
COCO BEFORE CHANEL
CORALINE
COUPLES RETREAT
CREATION
DISNEY’S A CHRISTMAS CAROL
DISTRICT 9
DRAG ME TO HELL
DUPLICITY
AN EDUCATION
EVA
EVERYBODY’S FINE
FANTASTIC MR. FOX
(500) DAYS OF SUMMER
G.I. JOE: THE RISE OF COBRA
GHOSTS OF GIRLFRIENDS PAST
HE’S JUST NOT THAT INTO YOU
HOTEL FOR DOGS
THE HURT LOCKER
ICE AGE: DAWN OF THE DINOSAURS
THE IMAGINARIUM OF DR. PARNASSUS
THE INFORMANT!
INKHEART
INVICTUS
IRON CROSS
IT’S COMPLICATED
JULIE & JULIA
LAND OF THE LOST
THE LAST STATION
THE LIGHTKEEPERS
THE MEN WHO STARE AT GOATS
THE MISSING LYNX
MOON
MY SISTER’S KEEPER
NIGHT AT THE MUSEUM: BATTLE OF THE SMITHSONIAN
OLD DOGS
ORPHAN
PARIS 36
PLANET 51
PONYO
THE PRINCESS AND THE FROG
THE PRIVATE LIVES OF PIPPA LEE
PUBLIC ENEMIES
PUNCTURED HOPE
RACE TO WITCH MOUNTAIN
THE ROAD
RUDO Y CURSI
A SERIOUS MAN
17 AGAIN
SHERLOCK HOLMES
SIN NOMBRE
A SINGLE MAN
SKIN
STAR TREK
THE STONING OF SORAYA M
SUNSHINE CLEANING
TERMINATOR SALVATION
TETRO
THAT EVENING SUN
THE TIME TRAVELER’S WIFE
TRANSFORMERS: REVENGE OF THE FALLEN
THE TWLIGHT SAGA: NEW MOON
2012
THE UNINVITED
UP
UP IN THE AIR
WATCHMEN
THE YOUNG VICTORIA

NOTE: The original version of this story was updated to reflect additional information on the ineligibility of "Crazy Heart" and "Where the Wild Things Are."

CORRECTION: As a reader pointed, out, the score to "There Will Be Blood" was originally misattributed.