You could have heard a pin drop in the press room as Penelope Cruz recounted the performance of a sex scene in her new movie, “Broken Embraces,” (Los Abrazos Rotos) directed by the man who helped launch her career, Pedro Almodovar.

In the scene Cruz, playing Lena, a B actress, has sex with her elderly husband while yearning for her lover, a film director. It takes place entirely under a set of white sheets, and when it’s done, Cruz goes to the bathroom to throw up, and comes back to find her husband playing dead.

Wearing a draped beige, strapless sheath at 10 am, she told a packed press room at Cannes on Tuesday that Almodovar – who first introduced her to the wider world in films including in “Live Flesh” in 1997 and “All About my Mother” in 1999 – rewrote the scene on the day of the shoot. 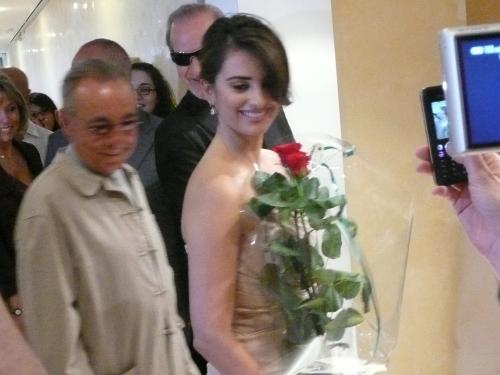 “When I arrived they said, ‘Pedro is out on the street, writing. Don’t talk to him.’ We were all waiting. He came back with an energy I’ll never forget,” she said in English. He then told the crew the scene. “Everybody was blown away. I got very emotional that day from peoples’ reactions.”

While the sex scene was being shot, she said, Almodovar kept speaking aloud the thoughts of her character. “I’ve never seen a love scene shot that way,” she said. “That day I thought I was going to pass out.”

The film is connected to Almodovar’s first iconic hit, “Women on the Verge of a Nervous Breakdown” (which is being shot as a TV pilot for Fox, and being prepared as a Broadway musical, he said). Within the movie, Cruz’s character, Lena, is performing in “Women on the Verge.” The new film, though, is a drama about the complex relationships between the film director and the women in his life. 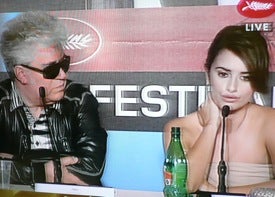 “I felt surrounded by ghosts of all these women I worked with 20 years ago,” Almodovar said about shooting “Embraces.”

Almodovar is one of the very few directors who focuses on women characters, understands them and sees the world from their perspective.

It was ever thus in Almodovar’s career. And he demonstrated how much he throws himself into helping his actors embrace their roles. “I have a fantastic agreement with all my actors. They allow the movie to touch intimate topics, things that are very painful. And if necessary I play all the parts on the set,” he said. “In fact I’m very shy. But I prefer to demonstrate all the parts. On my first film I performed cunninlingus on an actress, to show the actor who he was supposed to play the role.

Cannes is always full of surprises.

Meanwhile, IFC Films announced that it had bought the domestic rights in North America to "Ricky," by Francois Ozon ('Swimming Pool,' '8 Women').

"Adapted from the short story "Moth" by the English novelist Rose Tremain, Ricky is a fantastical thriller about a unique little boy and the struggles of a working-class single parent in contemporary France. Ricky premiered in competition at the 2009 Berlin Film Festival. The film stars Alexandra Lamy (The Ant Bully) and Sergi Lopez (Pan’s Labyrinth) and was produced by Chris Bolzli, Claudie Ossard and Vieri Razzini ."

On the other acquisition front, Sony Pictures Classics was said to be circling  "Looking for Eric," the Ken Loach comedy, and "A Prophet," the two and a half hour French gang-crime thriller that has been the hottest film at the festival. The latter is directed by Jacques Audiard.