Good morning, Entertainment One (eOne) stockholders — it’s been a great morning and early afternoon over in the U.K. for all of you.

Shares of ETO (Entertainment One Ltd.) on the London Stock Exchange are currently up 32% on the day, following the news late last night (local time) that toymaker Hasbro is acquiring the Canadian TV and film studio and home to consumer products stars Peppa Pig and PJ Masks (pictured above). Hasbro is paying $4 billion in cash for eOne.

See how eOne’s stock has performed Friday below. We chose a five-day window so readers can see the spike. The trading day across the pond is still ongoing. 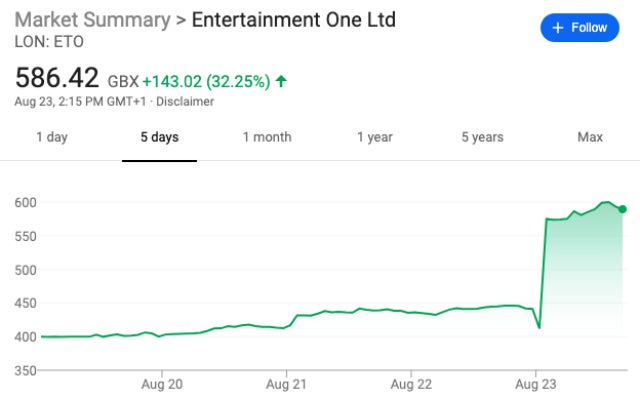 The increase makes sense, as under the terms of the deal, eOne shareholders are set to receive a 31% premium to eOne’s 30-day volume weight average price as of Thursday. In other words, the correlation is quite obvious and on the nose.

Shares in Hasbro, the American company behind NERF, Transformers and “Star Wars” toys — and the one shelling out all that money — are not enjoying the same direct boost stateside this morning.

Much of that decline started in after-hours trading Thursday. See the five-day view below. 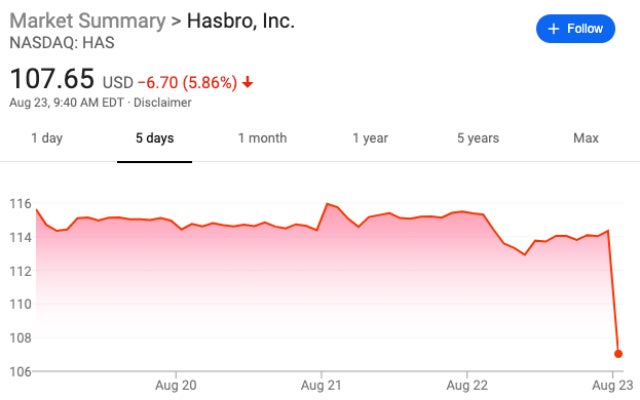 “The acquisition of eOne adds beloved story-led global family brands that deliver strong operating returns to Hasbro’s portfolio and provides a pipeline of new brand creation driven by family-oriented storytelling, which will now include Hasbro’s IP,” Brian Goldner, Hasbro chairman and chief executive officer, said in his Thursday announcement. “In addition, Hasbro will leverage eOne’s immersive entertainment capabilities to bring our portfolio of brands that have appeal to gamers, fans and families to all screens globally and realize full franchise economics across our blueprint strategy for shareholders. We are excited to welcome eOne’s talented employees from around the world into the Hasbro family.”

“Hasbro’s portfolio of integrated toy, game and consumer products, will further fuel the tremendous success we’ve achieved at eOne,” added Darren Throop, CEO of eOne. “There’s a strong cultural fit between our two companies; eOne’s stated mission is to unlock the power and value of creativity which aligns with Hasbro’s corporate objectives. eOne teams will continue to do what they do best, bolstered by the access to Hasbro’s extensive portfolio of richly creative IP and merchandising strength. In addition, the resulting expanded Hasbro presence in Canada through eOne’s deep roots will bring world-class talent and production capabilities to Hasbro. Along with our leadership team, I look forward to working with Hasbro on our joint growth and success for many years to come.”

The deal for the Canadian studio comes a month after Mark Gordon stepped down as president and chief content officer of the eOne’s film and TV divisions. Hasbro said that “top eOne executives” will be joining Hasbro with the sale, though the company did not identify who those would be. Steve Bertram has headed up eOne’s film and TV departments following Gordon’s exit, working closely with Peter Micelli, chief strategy officer of film and television, and Nick Meyer, president of film.

eOne is behind TV shows including ABC’s “The Rookie,” HBO’s “Sharp Objects” and films “Molly’s Game,” “The Girl on the Train” and Stephen Spielberg’s “The BFG” (eOne has a partnership with Spielberg’s Amblin Partners).