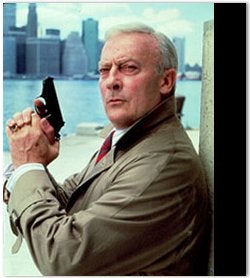 Edward Woodward, the star of films including "Breaker Morant" and "The Wicker Man" and TV series "The Equalizer," died Monday. He was 79.

His agent, Janet Glass of the Eric Glass Ltd. agency, said Woodward died in a hospital in Cornwall after an illness.

Woodward played roles in productions ranging from the popular British soap opera "EastEnders" to productions of Shakespeare. He also appeared in more than 40 films.

In a career that began in 1946 in a regional production of "A Kiss for Cinderella," his major breakthrough came with a lead role in ITV espionage drama "Callan," playing a reluctant hitman for a shadowy branch of British intelligence services.

Created as television’s answer to James Bond, "Callan" aired on Britain’s ITV from 1967 to 1972, and Woodward won a BAFTA Award for best actor for the show in 1970.

His last TV appearance was in the BBC One soap "EastEnders," earlier this year.

The show’s executive producer, Diederick Santer, said: "All of us at ‘EastEnders’ are very sad to learn that Edward has passed away. We were thrilled when he joined us for a stint of six episodes earlier this year. He was a delight to work with, and delivered a characteristically touching and layered performance."

Woodward’s last film appearances were in "Hot Fuzz" in 2007 and "Congregation of Ghosts," now in post-production.

"I think I’ve probably more television than any actor living," Woodward said in a 1987 interview with the Associated Press. "I’ve done over 2,000, could be 3,000 now, television productions."

"I suppose there is also the feeling that it is the largest medium by far for information, education and above all, entertainment," he added. "And after all, that’s what an actor’s life is all about. Getting work and entertaining people."

He also recorded several albums of music and poetry, including "Love Is the Key" in 1977 and "The Jewel That Was Ours" in 1994.

Woodward is survived by his second wife, actress Michele Dotrice, their daughter, and two sons and a daughter from his first marriage, which ended in divorce.

Funeral arrangements were not immediately announced.