Stop me if you’ve heard this one before: A horrible, catastrophic event wiped out most of humanity, and now a new, gleaming society has arisen, one where everyone wears white and behaves like an automaton, and anyone who shows emotions, much less — gasp! — love is hunted down as a threat to general order.

Unfortunately no one stopped director Drake Doremus (“Like Crazy”) or screenwriter Nathan Parker (“Moon”) for raking over these spent coals in “Equals,” a dystopian sci-fi saga that feels cobbled together from George Orwell, “THX-1138,” “The Giver,” perfume commercials and the Apple Store. Heck, before this thing’s over, Parker even steals one of Shakespeare’s better-known end-of-Act-II plot twists; you almost expect the final line to be “Nobody’s perfect” or “Th-th-th-that’s all folks!”

Our forbidden lovers are Silas (Nicholas Hoult) and Nia (Kristen Stewart), both of whom live in blandly boxy high-rises where compartments for sleeping, eating and showering come sliding out of the walls. After the apocalypse, this society is obsessed with space travel, and Nia writes articles about intergalactic exploration while Silas illustrates “speculative non-fiction” about the societal outsiders who have been banished because of their nasty emotions.

One day, Silas starts feeling things, and when he goes to the clinic he discovers he’s in the early stages of “Switched-On Syndrome”; see, in this world, people’s DNA gets treated to quash their emotions, but when that treatment relapses, SOS occurs. Silas’ engagement with the world manifests in a growing obsession with Nia, which Doremus expresses with lots of close-ups of her eyes, lips and hairline. 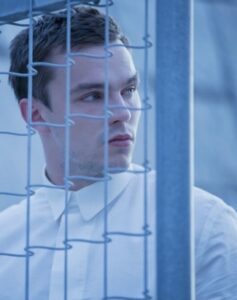 Mind you, both Hoult and Stewart have proven themselves to be empathic, multi-faceted actors, but here they’re not only forced to play characters who either have no feelings (or are pretending to — Nia’s got SOS too, but she hides it), but also are filmed by John Gulesarian (“The Overnight”) like fetish objects. The whole movie has a luminescent glow, making everyone and everything look like it’s against the back wall of a refrigerator, but the lead actors are turned into gleaming things, like sports cars on a freshman’s wall poster or casseroles in a Bon Appetit post-Thanksgiving spread.

There’s talk of a savage, primitive world beyond the walls, where the non-unfeeling live, but we never get to see it, and not for reasons that feel relevant to the plot. Instead, we’re stuck in the intentionally precise and bland future world; the production team no doubt gave the director exactly what he wanted, but all the whiteness becomes numbing after a while. It’s like receiving a J. Crew catalog in which the sweaters only come in eggshell, crème, bone, ecru, linen, cotton ball, Maalox, yeti, communion wafer, milky milk, snowstorm and liquid paper.

Ultimately, “Equals” fails because Silas and Nia aren’t all that much more interesting as a romantic couple than they are as zombie-like individuals. (Granted, they’re not nearly as annoying as the protagonists of Doremus’ “Like Crazy,” but nobody is.) Stewart has been doing some interesting work of late, but this is a movie that will give detractors another excuse to unleash their unkind lip-biting impersonations.